Alphabet's Google has quietly acquired a UK startup focused on technology that turns surfaces such as phone displays into speakers.

This course is all about managing the state in react application using the redux toolkit. Each topic included in this course is added incrementally, to make sure that you have a solid foundation of knowledge. You'll find plenty of discussions added in to help you understand exactly when and where to use each feature of React and Redux. We will take a look at the most common API in the redux toolkit that you may for next project. React is the most popular Javascript library of the last five years, and the job market is still hotter than ever.

Friendship Paradox Redux: Your Friends Are More Interesting Than You

Feld's friendship paradox states that "your friends have more friends than you, on average." This paradox arises because extremely popular people, despite being rare, are overrepresented when averaging over friends. Using a sample of the Twitter firehose, we confirm that the friendship paradox holds for >98% of Twitter users. Because of the directed nature of the follower graph on Twitter, we are further able to confirm more detailed forms of the friendship paradox: everyone you follow or who follows you has more friends and followers than you. This is likely caused by a correlation we demonstrate between Twitter activity, number of friends, and number of followers. In addition, we discover two new paradoxes: the virality paradox that states your friends receive more viral content than you, on average, and the activity paradox, which states your friends are more active than you, on average." The latter paradox is important in regulating online communication.It may result in users having difficulty maintaining optimal incoming information rates, because following additional users causes the volume of incoming tweets to increase super-linearly.While users may compensate for increased information flow by increasing their own activity, users become information overloaded when they receive more information than they are able or willing to process. We compare the average size of cascades that are sent and received by overloaded and underloaded users. And we show that overloaded users post and receive larger cascades and they are poor detector of small cascades. 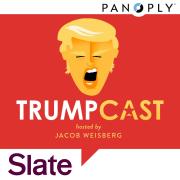 Is there any reason to feel anxious about the presidential race tightening? Not really, but even a little is too much. Subscribe in iTunes RSS feed Download Play in another tab Slate Plus members: Get your ad-free podcast feed. Jacob Weisberg talks to Harry Enten, FiveThirtyEight's senior political writer and analyst, about whether or not we have anything to worry about just under two weeks out from the election. Trumpcast is brought to you by Helix Sleep.

Mom and Dad Are Fighting: The "Empathy Redux" Edition

On this week's episode, Rebecca, Carvell, and Gabe revisit a question from the May 25 episode, with some help from UCLA researcher Nicole McDonald, who studies the development of empathy. Plus: parenting triumphs and fails, recommendations, and more. And on Slate Plus this week, Slate contributor Isaac Butler describes how an inopportune metaphor screwed up his family's morning.