Which haircuts have been banned from schools?

Most people would expect a burger with fries after such a statement, but for some, the phrase is not an invitation to your local drive-through, but a boy's haircut. 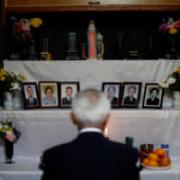 A team of researchers have found that stray and free-ranging domestic cats fed by humans are preying on rare species on Tokunoshima island in Kagoshima Prefecture. "We hope people will know that feeding promotes the population growth of cats and affects the natural environment," said the team, consisting of researchers from institutes such as Kyoto University and the Forest Research and Management Organization's Forestry and Forest Products Research Institute. Predation by cats on endangered endemic species inhabiting the island, such as the Amami rabbit, has been a problem due to the proximity of forests and human-populated areas. The Amami rabbit, which has the scientific name Pentalagus furnessi, is a government-designated special natural treasure. Yuya Watari, chief researcher at the Forestry and Forest Products Research Institute, and others collected the feces and hairs of cats captured in the forests between December 2014 and January 2018.

Hairy situations used to be part of the football game plans at Lompoc High. The long, flowing locks that billowed out the back of Ainuu Taua's helmet and down the back of his jersey were essential. Wearing his hair in braids, as Taua occasionally did, would get him upbraided. "You intimidate everybody," Coach Andrew Jones told his star defensive lineman of the look Jones preferred with his hair down. UCLA might feel similarly about Taua after converting him to fullback.

This is not a drill. A ginger haired emoji is finally a step closer. According to Unicode, redheads will be able to describe themselves in emoji form from June 2018 after the organisation's emoji subcommittee recommended 67 new characters. It's not just ginger emojis set to make their way to our fingertips though. There'll be new emojis for those with bald heads, curly hair and silver foxes will be represented with a white-haired emoji.

Team Flash is going to face off against a silver-haired baddie in an upcoming episode of "The Flash." Grant Gustin, Keiynan Lonsdale, Carlos Valdes and Jessica Camacho were spotted filming a sequence in downtown Vancouver on Friday morning, which involved a mysterious silver-haired actor in costume. The name of the actor and the character he plays are currently unknown, but set photos shared by YVRShoots suggest that he's portraying a villain. In one of the photos, The Flash (Gustin) appears to tackle the mystery character from the back, as Kid Flash (Lonsdale), Cisco (Valdes) and Gypsy (Jessica Camacho) ready themselves to help the Scarlet Speedster. There are also a couple of snapshots that show The Flash and Kid Flash seemingly shooting lightning bolts at someone.