Alzheimer's disease has an unusual distinction: It's the illness that Americans fear most -- more than cancer, stroke or heart disease. The rhetoric surrounding Alzheimer's reflects this. People "fade away" and are tragically "robbed of their identities" as this incurable condition progresses, we're told time and again. Yet, a sizable body of research suggests this Alzheimer's narrative is mistaken. It finds that people with Alzheimer's and other types of dementia retain a sense of self and have a positive quality of life, overall, until the illness's final stages.

Report Shows Costs of Alzheimer's, Other Forms of Dementia

Alzheimer's disease robs people of their memories and their ability to think clearly, and the latest annual report from the Alzheimer's Association has placed a price tag on how the disease can rob families financially. According to the report, in 2016 an estimated total of 236 billion will go toward treating Alzheimer's and other forms of dementia, when including the payments from the government, private insurance and out-of-pocket costs. "Families get blind-sided by what the costs actually are, and the costs of long-term care are significant," says Beth Kallmyer, vice president for constituent services at the Alzheimer's Association. The disease affects 11 percent of people 65 and older, and is the sixth-leading cause of death in the U.S. No treatment slows Alzheimer's degeneration of brain cells, and no cure has been found. Though not much can be done on the medical side, the Alzheimer's Association stresses that preparing financially will prevent families from making long-term care decisions in an emergency situation, without having the time to review options.

Stimulating the brain with electrical signals could help people suffering from memory loss to remember new events. Researchers found deep brain stimulation with electrodes helped people who usually struggle to remember things to create new memories. The discovery could one day be used to help people suffering from conditions such as dementia and epilepsy, the researchers claimed. The researchers studied 102 patients being treated for drug-resistant epilepsy. They recorded electrical activity from electrodes implanted in the patients' brains. 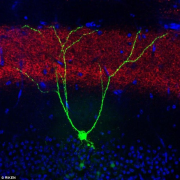 They can be traumatic, joyful and sometimes hard to remember but memories play a significant role in who we are and how we think. Now, scientists have developed a technique that not only pinpoints memories in the brain, to reveal what they look like, it can be used to restore thoughts that have been lost. The research additionally shows that patients with Alzheimer's may not have problems encoding memories, and instead the fault lies in retrieving the memory instead. This image reveals what a memory looks like. It depicts a memory engram cell (green) in the hippocampal dentate gyrus (DG) region of a mouse brain with symptoms similar to Alzheimer's disease.

Before I Forget: the video game that tackles dementia

When you're playing Before I Forget, wandering around a house inspecting everyday objects, trying to trigger a memory, it feels like a lot of narrative-driven video games: you're attempting to piece together a story using clues left behind. But this game puts you in the shoes of Sunita, a woman suffering from early-onset dementia, which infuses what you're doing with sadness and significance. The house is delineated in monochrome, colour seeping back as she gradually reconnects with her past self. Examining a photograph provides a clue to her identity; a familiar piece of music might recall an important person in her life. Other symptoms are conveyed in more disconcerting ways.