Blinken's 'diplomacy is back' tweet seen as dig at Trump team

Fox News Flash top headlines are here. Check out what's clicking on Foxnews.com. U.S. Secretary of State Antonin Blinken marked his first trip to Asia as the country's top diplomat by appearing to take a parting shot at the Trump administration. "Diplomacy is back at the center of U.S. foreign policy," he posted from his official account. "Today, I'm en route to Tokyo and Seoul to discuss how the United States will strengthen our cooperation in the #IndoPacific and across the globe with two of our closest allies."

That puts at risk not only the series of regional agreements for rapprochement but also exacerbates a worldview that the United States cannot be depended upon to hold up its end of diplomatic deals. The Abraham Accords, Mr. Trump's signature foreign policy achievement, have either newly brokered or restarted economic and political ties for Israel with Bahrain, the United Arab Emirates, Sudan and Morocco. Officials familiar with the administration's efforts said Oman and Tunisia might be the next states to join, and the warming could be expanded to nations in Asia and sub-Saharan Africa even after Mr. Trump leaves office in January. Formally easing tensions between Israel and its regional neighbors is a success, to be sure, that past Republican and Democratic presidents alike have long sought to foster. "All diplomacy is transactional, but these transactions are mixing things that ought not to have been mixed," said Robert Malley, the president and chief executive of the International Crisis Group, who is close to Antony Blinken, Mr. Biden's pick for secretary of state.

Israel-Gaza crisis drags Biden into vortex he sought to avoid

U.S. President Joe Biden took office seeking to avoid a messy entanglement in the Israeli-Palestinian conflict, instead trying to pivot America's foreign policy to China, revive the Iran nuclear deal and wind down America's "forever wars." This week's flare-up in the Middle East is showing how that plan never really had a chance. What started off as hostilities between Israeli security forces and Palestinians in contested East Jerusalem has now quickly escalated to a near full blown war between Israel and the Hamas-run Gaza Strip, dragging the U.S. back into the center of diplomatic efforts to broker a ceasefire before the situation becomes more uncontrollable. After at least 25 high level calls since the weekend, Biden spoke with Prime Minister Benjamin Netanyahu on Wednesday and, while defending Israel's right to respond to rocket fire from Gaza, said "my expectation and hope is that this will be closing down sooner than later." "My national security staff and defense staff has been in constant contact with their counterparts in the Middle East, not just with the Israelis but also with everyone from the Egyptians to the Saudis to the Emirates et cetera," Biden said. 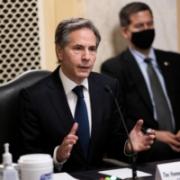 U.S. President-elect Joe Biden's pick to lead the State Department has said the U.S. is still a "long way" from securing a long-term deal with Tehran that improves the original Iran nuclear agreement, but insisted that the country's ability to develop weapons of mass destruction be put "back in the box." Secretary of state nominee Antony Blinken reiterated the incoming administration's desire to re-enter the 2015 accord that President Donald Trump withdrew from three years ago. But Blinken -- who said the accord helped restrain Iran's nuclear program -- added that Tehran must return to compliance with the terms of the deal first, and he vowed to work closely with Congress as potential talks progress. "If Iran comes back into compliance we would, too, but we would use that as a platform with our allies and partners who would once again be on the same side with us, to seek a longer and stronger agreement," Blinken said in testimony Tuesday to the Senate Foreign Relations Committee. "Having said that, I think we're a long way from there. We would have to see once the president-elect is in office what steps Iran actually takes and is prepared to take."

Israel Defense Forces international spokesman Jonathan Conricus argues that none of the violence over the past two weeks'would have been possible without Iranian knowledge, funding, expertise and hands on involvement on the ground.' Secretary of State Antony Blinken stressed the Biden administration's focus on an "equal peace" between Israel and the Palestinian people after the most recent bloody conflict in the region. The two nations agreed to an unconditional cease-fire following 11 days of fighting that led to intense international scrutiny and criticism of the response by Israel. Critics – both foreign and domestic – have questioned President Biden on his stance after he reiterated his full support of Israel, but Blinken insists the administration wants to ensure an equal peace between Israel and the Palestinians. FILE - In this Feb. 4, 2021 file photo, Secretary of State Antony Blinken speaks at the State Department in Washington.