Google's Pixel to take on the iPhone: Android handsets being unveiled alongside AI Home speaker to take on Amazon's Echo

Google has unveiled a new range of phones with a built in smart assistant to take on Apple and Amazon. The search giant has unveiled it's biggest ever range of hardware - with phones, smart speakers, TV dongles, a smart speaker and a wifi router. It says it hopes to use AI to create'a personal Google for each and every user.' At a special event in San Francisco the firm is unveiling a raft of new products - even though most of them have already leaked online. They include two new phones, a Pixel and the 5.5-inch Pixel XL The Pixel runs on a Snapdragon 821 2.15GHz processor. 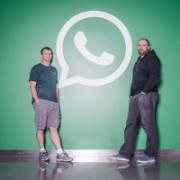 The week before David Marcus will take the stage at Facebook's annual F8 developers' conference to announce new tools to help businesses interact with you and me on Messenger, he tries to explain his ambitious idea for the future. Sure, he'll tell the throngs of developers gathering today at San Francisco's scenic former US Army post, Fort Mason, about bots. He'll announce a new bot platform, new ways to find apps, and an artificial intelligence-powered bot engine. At the end of the day, there'll even be free Messenger messenger bags! But all these announcements are just data points that herald something much grander, according to Marcus, who is vice president of messaging at Facebook.

Snapchat Inc. is in the process of acquiring personalized search app Vurb, according to people familiar with matter. The Venice entertainment app maker would spend more than 100 million in cash and stock to purchase the San Francisco start-up, said a source unauthorized to speak publicly about the deal. The transaction hasn't been finalized, multiple sources said. Vurb co-founder and Chief Executive Bobby Lo would receive 75 million over several years -- separate from the initial purchase price -- if he stays at Snapchat. The tech news website the Information first reported details of the deal Monday.

A woman accused of "capitalizing on her physical attraction" to steal the identities of people she met on dating and home rental websites will face a judge Wednesday after she was arrested at a luxury hotel in Santa Barbara, according to the Los Angeles County Sheriff's Department. Maria Christina Johnson, 43, is believed to have dated or rented from her victims to gain access to their homes, where she'd scavenged through their belongings to obtain enough personal information to open new lines of credit without their knowledge, authorities said. Johnson -- also known as Maria Hendricks, Gia Hendricks, Maria Christina Gia and Maria Hainka -- has been arrested and charged multiple times before for various forms of fraud, identity theft and burglary before, according to a statement from the sheriff's department. After she successfully assumed an identity, investigators say, she moved into high-end hotels and charged thousands of dollars of goods and services to her victims, even attempting to purchase a car at one point, authorities said. By the time she was arrested as a guest of a luxury, beachside coastal resort in Santa Barbara on Thursday, investigators estimated Johnson, who lists her occupation as a dog trainer, had spent more than 250,000 of her victims' funds.

Three Day Rule, a matchmaking service with headquarters in Santa Monica, has raised 650,000 from the Dallas Angels Network investment group and 550,000 from several wealthy individuals. The company's 20 matchmakers -- spread across seven cities -- use software and intuition to find potential partners for customers, who pay about 4,000 for three months of assistance. Three Day Rule identifies matches from its own database, which includes people who have signed up free of charge at networking events, industry conferences and on the firm's website. But the pool goes beyond that. JDate, Christian Mingle and OkCupid allow Three Day Rule to choose from people listed on those dating websites too.