In August 2014, I wrote a column about artificial evolution. The focus was on the creation of new forms of life, biological or digital, which would then evolve at incredible speeds. The emphasis then was on the software part of life: the algorithms that gave the appearance of intelligence. Recent reports from MIT's CSAIL (computer science and artificial intelligence lab) indicate that researchers were able to create a working robot using a 3D printer. Creating inexpensive robots in itself is not terribly novel.

We define embodied evolution (EE) as evolution taking place in a population of robots. Further, we stipulate that the evolutionary algorithm is to execute in a distributed and asynchronous manner within the population, as in natural evolution. Thus, algorithms that centrally maintain and manipulate the specifications of individual agents are not permitted. We wish to create a population of physical robots that perform their tasks and evolve hands-free without human intervention of any kind, as Husbands (1992) articulates. Here, we introduce our conception of embodied evolution and report the initial results of experiments that provide the first proof-of-concept for EE.

Humans and robots together are symbiotically creating a new age of exploration, extending human presence and evolution to transform us into a multi-planet species. Our multi-planet evolution will be a continuum of human and robot, with us physically present on Earth and Mars and virtually present beyond. Humankind must make it to Mars to overcome the physical and psychological limit of being confined to our fragile singular planet. But technologies for exploration beyond Mars are evolving so quickly that by the time we settle on the Red Planet our species will be completely immersed in and interacting with worlds throughout the solar system and even beyond. Let us imagine how that might be, looking into our future.

Beware this article may contain spoilers! Here is a list of AI movies you should definitely watch. I guess I first realised what AI meant when I was watching A.I. Artificial Intelligence: a small boy could technically be replaced by a robot, expressing his feelings, thinking and learning things like a real human. What struck me in the movie, was that no matter what the robot did to be like a real boy, it seemed to stop him from being accepted as a son. It seemed inevitable: Humans & AI could not coexist in the same Universe. 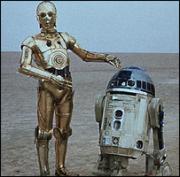 The story of androids on the silver screen cannot pass without mention of three contemporary classics: The replicants rebelling against their pre-programmed demise in Blade Runner (1982); Arnold Schwarzenegger's gun-toting turn as 2029-vintage cyborg in The Terminator (1984); and Peter Weller as officer Alex J Murphy's alter ego in the dystopic Detroit of RoboCop (1987).