At Nintendo's Switch press conference today, the company revealed that its upcoming gaming console will have -- wait for it -- a capacitive touch screen. This is a pretty big move for Nintendo, which has traditionally gone with resistive touch displays -- the DS, the 3DS and the Wii U all had resistive touch screens. Resistive touch screens are typically more inaccurate and much harder to use than the capacitive displays that are widely used in smartphones and tablets today. It's a small difference, perhaps, but it's a move that makes the Switch that much more enticing to a modern audience. Click here to catch up on the latest news from Nintendo's Switch event.

Most tablet computers are dominated by a touch screen. The one Slavi Slavev shows me is not most tablets, though. He loads a website on the display, presses a silver button on the device's side, and tiny bubbles rise from various holes in a grid that dominates the top half of the gadget. Sixty-five words at a time, this tablet translates text from the Web and other digital sources into Braille so people who are blind or have low vision can more easily access anything from mindless jokes to e-books to political news. Slavev is the chief technology officer and a cofounder of the startup that's making this tablet, the Blitab.

Which tablet to buy for your kid in 2019: These are 5 of the best out right now in the UK 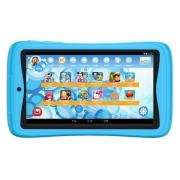 Kids are device-hungry nuts these days. Seriously, WTF happened to Blue Peter and a book before bedtime? Technology has changed a lot since you were small. Your kids have probably mastered the features on your iPhone better than you have due to constantly asking to play with it. And when you do eventually get it back, it's a sticky mess covered in slobber and other unexplainable slimes.

Can the venerable laptop keyboard get more touchy-feely -- and in a good way? We're about to find out. Higher-end models of Apple's MacBook Pro now come with a narrow touch screen above the regular keyboard for quick access to common settings and tasks, while Lenovo's Yoga Book laptop loses the physical keyboard entirely. The traditional keyboard has never struck me as needing much improvement, although people who've grown up on touch screens might well feel differently. These touch innovations, in fact, may mostly be aimed at luring such users to laptops.

Oculus' Touch controllers priced at 190 in the UK

If you still haven't figured out why the Oculus Rift sells for a solid 200 less than HTC's Vive, let this be the final word: it's the motion controllers. According to a display in a GAME store in the UK (found by our very own Nick Summers), Oculus' virtual reality motion controllers will retail for 190, or just over 200 after deducting local UK taxes. That's expensive, but not at all unexpected -- if that price holds across the pond, it puts the cost of a room-scale Oculus Rift kit on equal ground with HTC's 800 Vive. Oculus Touch controllers to cost 190 in the UK. As daunting as that total price is, it's sort of the going rate for immersive, room-scale VR.