You probably didn't see this one coming. Microsoft is poised to acquire video game mega-publisher Activision Blizzard in a $68.7 billion deal. The Wall Street Journal reported this today, and the Xbox maker itself confirmed on Tuesday. While the deal isn't yet finished and is still subject to a regulatory process that could derail it, the move could potentially mark a seismic shift in the way competition plays out between gaming's three biggest hardware makers: Microsoft, Nintendo, and PlayStation. Activision is perhaps best known for its stewardship of the Call of Duty franchise, a blockbuster first-person shooter series that regularly leads the year's top sellers with its annual November releases. 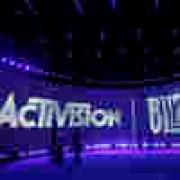 Microsoft just made one of the largest-ever bids for a game studio. The company has announced plans to acquire Activision Blizzard for $95 per share, valuing the all-cash deal at an enormous $68.7 billion. The deal would make the combined entity the "third-largest" game company by revenue, according to Microsoft, and would put titles like Call of Duty, World of Warcraft and Candy Crush under the company's wing. Microsoft plans to add Activision Blizzard games to Game Pass as part of the deal. Mobile gaming is also a significant factor in the acquisition, Microsoft said.

Microsoft will buy Activision Blizzard, betting $70 billion on the future of games

SEATTLE – Microsoft plans to buy the powerhouse but troubled video game company Activision Blizzard for nearly $70 billion, its biggest deal ever and one that places a major bet that people will spend more and more time in the digital world. The blockbuster acquisition, announced Tuesday, would catapult the company into a leading spot in the $175 billion gaming industry. Games on virtually every kind of device, from bulky consoles to smartphones, have gained even greater popularity during the pandemic. Technology companies are swarming around the industry, looking for a bigger share of attention and money from the world's 3 billion gamers. In an industry driven by big franchises, Activision makes some of the most popular titles, including Call of Duty and Candy Crush.

Activision Blizzard has begun laying off some of its 9,600 employees, mostly in non-development sectors, even as it reported a record net revenue of $7.50 billion in 2018, up from $7.02 billion in 2017. Activision expects to lose 8 percent of its staff, or nearly 800 employees. The company plans to restructure its efforts and focus on core franchises such as Overwatch, Diablo, Call of Duty, Candy Crush, Warcraft and Hearthstone. On a call with investors today, Activision CEO Bobby Kotick called 2018 a record year. "While our financial results for 2018 were the best in our history, we didn't realize our full potential," Kotick said in Activision's 2018 financial report.