Under the concept, operators, government agencies and individual citizens would have access to the data. The recent test results are expected to provide momentum for proposed package delivery to consumers and many other drone uses currently stalled by regulatory hurdles. U.S. air-safety and law-enforcement officials have balked at approving extensive commercial drone operations without reliable identification techniques. In addition to Wing, which is slated to demonstrate fledgling-package delivery procedures in Virginia this year, the flights included drone-service companies AirMap Inc. and Kittyhawk. With three of the burgeoning industry's leading companies backing the approach and promising to step up testing, proponents hope to persuade the Federal Aviation Administration to loosen flight restrictions before completion of full-fledged rule making expected to take years. 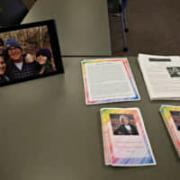 WASHINGTON – All but the smallest civilian drones would have to broadcast radio tracking data to ensure greater safety and prevent terrorism under a sweeping proposal unveiled by U.S. regulators Thursday. The long-awaited draft rules call for a massive new tracking network for everything from toys to larger commercial drones so that law enforcement can spot the devices flying anywhere, from congested urban areas to the most rural zones. The controversial measure by the Federal Aviation Administration, which is subject to public comment and could change before it becomes final, is a key foundation to advance drone-driven commerce, including deliveries of consumer goods by companies such as Alphabet Inc.'s Wing and Amazon.com The rules would come into full force three years after being finalized. "Remote ID technologies will enhance safety and security by allowing the FAA, law enforcement and federal security agencies to identify drones flying in their jurisdiction," Transportation Secretary Elaine Chao said in a press release.

WASHINGTON – The world's largest manufacturer of civilian drones is proposing that the craft continually transmit identification information to help government security agencies and law enforcement figure out which might belong to rogue operators. DJI, a Chinese company, said in a paper released Monday that radio transmissions of an identification code, possibly the operator's Federal Aviation Administration's registration number, could help allay security concerns while also protecting the operator's privacy. The paper suggests steps that can be taken to use existing technologies to develop an identification system, and that operators could include more identification information in addition to a number if they wish. Anyone with the proper radio receiver could obtain those transmissions from the drone, but only law enforcement officials or aviation regulators would be able to use that registration number to identify the registered owner. Law enforcement agencies and the U.S. military raised security concerns last year after FAA officials proposed permitting more civilian drone flights over crowds and densely populated areas.

Drone industry and law-enforcement officials are struggling to find common ground over expanding flights and protecting public safety, a debate thrust into the public spotlight by a reported assassination attempt on Venezuelan President Nicolás Maduro. The Federal Aviation Administration is projecting a fourfold increase, from more than 110,000 currently, in the number of commercial drones flying in U.S. skies in the next five years. U.S. law-enforcement officials, however, want to delay widespread operations until reliable defensive systems are developed. Saturday's attack with unmanned aircraft in Caracas was a reminder for the drone industry and U.S. government officials over the potential security threats even readily available commercial drones can pose. Venezuelan authorities said a pair of explosive-laden drones carrying a total of about 4 pounds of plastic explosives were part of an unsuccessful assassination attempt during an outdoor ceremony in Caracas, with one of the vehicles detonating after government jamming devices knocked it off course.

The world's largest drone manufacturer has announced plans for a new smartphone app that lets users identify mysterious drones flying around their neighborhood. Developed by DJI, the Shenzhen based drone giant, the unnamed app is targeted for a release in early 2020 pending approval by government regulators. The app will have a range of around .6 miles using WiFi Aware, a new communication protocol that allows WiFi-enabled devices to communicate with one another. DJI announced the new app at the United Nations-sponsored Drone Enable conference in Montreal this week. 'We've created a remote identification solution that works with what people already have,' DJI's Brendan Schulman told Reuters.