The Race to Quantum Technologies and Quantum Computers (Useful Links) 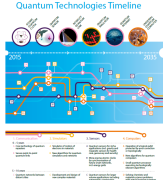 One of my main research directions in the last decade is quantum information theory and quantum computers. It is therefore a pleasure to report and give many links on the massive efforts carried out these days in these directions and the great enthusiasm and hope these efforts carry. "Nature" article Quantum computers ready to leap out of the lab in 2017. It is mainly on Google, Microsoft, and Monroe's lab mentioning also IBM, Rigetti and Quantum Circuits (a new startup by the Yale group). Regarding topological quantum computing Leo Kouwenhoven declares that "2017 is the year of braiding," How to say "Quantum computers" in other languages?

Microsoft is accelerating its efforts to make a quantum computer as it looks to a future of computing beyond today's PCs and servers. Microsoft has researched quantum computing for more than a decade. Now the company's goal is to put the theory to work and create actual hardware and software. To that effect, Microsoft has put Todd Holmdahl--who was involved in the development of Kinect, HoloLens, and Xbox--to lead the effort to create quantum hardware and software. The company has also hired four prominent university professors to contribute to the company's research.

Microsoft today shared plans to release an open cloud quantum computing service in private preview. A partnership with the startup IonQ announced today will enable developers to use existing Microsoft products -- like Visual Studio or the Quantum Development Kit -- along with quantum computers. The news follows recent breakthroughs in quantum computing from IBM Research and Google, who announced on October 23 that it achieved quantum supremacy with the 54-qubit Sycamore processor. Quantum computing is based on quantum physics. Quantum computers run on quantum bits or qubits, and when qubits are maintained in a cold state they can scale high-performance computation in a way that's hard to achieve today with traditional supercomputers. 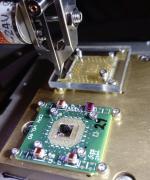 During last September's Ignite conference, Microsoft heavily emphasized its quantum computing efforts and launched both its Q# programming language and development kits. This year, the focus is on other things, and the announcements about quantum are few and far between (and our understanding is that Microsoft, unlike some of its competitors, doesn't have a working quantum computing prototype yet). It did, however, announce an addition to its Quantum Development Kit that brings a new chemical simulation library to tools for getting started with quantum computing. While there are plenty of applications for quantum computing once it becomes a reality, quite a few experts are betting on chemical simulations as one of the first areas where developers will be able to reap the fruits of this new computing paradigm. It's maybe no surprise then that Microsoft is also betting on this.