Why North Korea Has No Interest in Talking to the South

Moon said the Koreas should start off with "easy" subjects. He proposed talks for reducing animosities across their heavily armed border and a resumption of meetings between aging relatives separated by war. He invited the North to participate in next year's Winter Olympics, which South Korea is hosting. And he proposed ambitious longer-term projects, such as reconnecting an inter-Korean railway and building a gas pipeline connecting the Koreas with Russia.

South Korea also proposed that athletes from the two Koreas march together at the Games' opening ceremony and other joint activities between the two nations during the Games, Chun told reporters outside the first formal talks between North and South Korea in more than two years.

PYEONGCHANG, SOUTH KOREA – International Olympic Committee President Thomas Bach will visit North Korea after the Pyeongchang Winter Olympics as part of an agreement between the IOC and North and South Korea, a source within the Olympic movement told said Monday.

Unlikely for Winter Olympics to Be Icebreaker Between Koreas 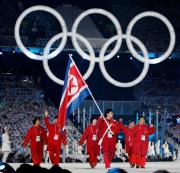 FILE - In this Feb 12, 2010 file photo, North Korea's Song Chol Ri carries the flag during the opening ceremony for the Vancouver 2010 Olympics in Vancouver, Canada. Seven months ahead of the Pyeongchang Olympics, many in South Korea, including new liberal President Moon Jae-in, hope to use the Games as a venue to promote peace with rival North Korea.

North Korea Says It Is Open to Talks With the U.S.

North Korea has said it is open to holding talks with the United States, according to the South Korean government. It is the first sign of willingness in years.