iPhone 7: What Apple's WWDC announcements might tell us about the new phone

Apple is about to reveal iOS 10 – the operating system that will power the next iPhone – at its Worldwide Developer Conference. Though the company tends to use the event for software announcements, rather than new devices, it can be an important moment for getting a feel for what Apple is working on, and what exactly that secret new phone will look like. As such, the event can be one of the main ways of seeing what the new iPhone as well as other products will look like. Here's what to look out for. It's increasingly thought that Apple is dropping its traditional release schedule for its handsets.

iPhone 7 will be the last phone with an actual home button, according to reports

The upcoming iPhone might be the last one to feature a home button, according to a new report. The 2017 handset – long rumoured to be a far bigger upgrade than any in previous years, including the iPhone 7 – will just be one big sheet of glass on the front, according to a Bloomberg report. That will be achieved by dropping the home button that has sat on the bottom of iPhones ever since they were first released in 2007. As such, it will likely bring a whole new design to the phone – which has previously been marked out by the iconic round shape at its bottom. Jonathan Pierrard, 26, from Rossignol, Belgium is the first customer to leave with the new iPhone 6s at The Apple Store in Opera, after queuing for few days, in Parisr to open new shortcuts - a feature Apple calls 3D Touch.

iPhone 7 might get rid of mute switch as well as headphone jack, leaked pictures suggest 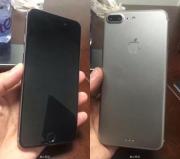 Two very important things might be missing from the next iPhone, according to leaked pictures. The next Apple handset might have the mute switch that usually sits on the side of the phone taken off, as part of a re-design that is expected to leave the phone looking mostly the same, but remove the headphone jack from the bottom and the antenna lines from the back. In what is claimed to be a leaked photo from Chinese social media site Weibo confirm previous rumours about the upcoming iPhone. But they also offer the clearest look yet at the side of the phone – showing the new changes. Removing the mute switch on the side of the phone would be in keeping with Apple's apparent strategy for its hardware, which tends to focus on making it simpler and smaller than the year before.

iPhone 7 release date might come at the end of September, later than people had thought

The release of the iPhone 7 might come later than people thought. Rather than falling in the middle of the month, as expectations and previous leaks had suggested, the phone might instead be released towards the end, according to a new report. New leaked retail schedules from AT&T phone shops suggest that staff will be told to work later on 23 September to reset displays. That might suggest that the company will be getting ready to put the phones on sale that day, or at least that week, many have suggested. Jonathan Pierrard, 26, from Rossignol, Belgium is the first customer to leave with the new iPhone 6s at The Apple Store in Opera, after queuing for few days, in Parisr to open new shortcuts - a feature Apple calls 3D Touch.

The iPhone 7 might have got its release date – two months before it's actually launched. Apple's next handset is set to hit shelves on 16 September, according to usually reliable leaker Evan Blass. The phone had always been expected to launch in September, since Apple has launched and then released all of the recent iPhones that same month. But the new leak appears to give a clear date they'll come out – and prepare people for getting into the long queues that usually form in anticipation. Jonathan Pierrard, 26, from Rossignol, Belgium is the first customer to leave with the new iPhone 6s at The Apple Store in Opera, after queuing for few days, in Parisr to open new shortcuts - a feature Apple calls 3D Touch.