Nvidia has come across more than 1,300 AI startups in its Inception program, but the graphics and AI chip maker believes that there aren't enough artificial intelligence startups out there. Jeff Herbst, vice president of business development, said that Nvidia wants to partner with venture capitalists to fund even more AI startups that will build out the necessary parts of the ecosystem for AI, which is expected to become a huge part of the technology landscape going forward. He said the doors are open to partnering because there are so many more startups than Nvidia can help or finance on its own. Nvidia held a lunch on Thursday at its GPU Technology Conference to enlist dozens of venture capitalists in its crusade to change the world through artificial intelligence. Five startups made presentations to the VCs during the lunch, and Herbst spoke with Jim McHugh, general manager of Nvidia's deep learning group, about the trends that will create opportunities for AI startups in the future.

And in the next few years, it will transform every industry. Soon, self-driving cars will reduce congestion and improve road safety. AI travel agents will know your preferences and arrange every detail of your family vacation. And medical instruments will read and understand patient DNA to detect and treat early signs of cancer. Where engines made us stronger and powered the first industrial revolution, AI will make us smarter and power the next. What will make this intelligent industrial revolution possible? A new computing model -- GPU deep learning -- that enables computers to learn from data and write software that is too complex for people to code. 3. NVIDIA -- INVENTOR OF THE GPU The GPU has proven to be unbelievably effective at solving some of the most complex problems in computer science. 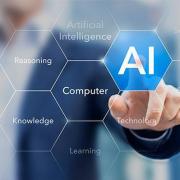 Nvidia sales executive Kevin Connors says channel partners play an important role in the chipmaker's strategy for selling and supporting GPU-accelerated solutions for artificial intelligence -- a market that is still in its early stages and can provide the channel major growth opportunities as a result. "People are wanting higher performance computing at supercomputing levels, so that they can solve the world's problems, whether it's discovery of the next genome or better analysis and other such workloads," Connors, Nvidia's vice president of sales, global partners, said in an interview with CRN. The Santa Clara, Calif.-based company's GPUs have become increasingly important in high-performance computing and artificial intelligence workloads, thanks to the parallel computing capabilities offered by their large number of cores and the substantial software ecosystem Nvidia has built around its CUDA platform, also known as Compute Unified Device Architecture, which debuted in 2007. "As a company, we've always been focused on solving tough problems, problems that no one else could solve, and we invested in that. And so when we came out with CUDA -- which allowed application developers to port their high-performance computing apps, their scientific apps, engineering apps to our GPU platform -- that really began the process of developing a very rich ecosystem for high-performance computing," said Connors, who has been with Nvidia since 2006.

The 10th edition of the $9.71-billion NVIDIA Corporation's annual GPU Technology Conference (GTC 2018) for GPU developers opened on Tuesday to an audience of 8,500 where its Founder, President and CEO, Jensen Huang unveiled a series of advances to its deep learning computing platform. For over two hours, Huang took the audience through some "amazing graphics, amazing science, amazing AI and amazing robots." Introducing NVIDIA RTX technology that runs on a Quadro GV100 processor, he said: "This technology is the most important advance in computer graphics in 15 years as we can now bring real-time ray tracing to the market. Virtually everyone is adopting it." Elaborating on its relevance, he said, the gaming industry that makes 400 games a year, uses ray-tracing to render entire games in advance.

Then There Were Six: AI Startups Get Winnowed Down Ahead of NVIDIA's Inception Finals at GTC The Official NVIDIA Blog

Take smart people, add the most disruptive new technology of our time, and inject money. Welcome to NVIDIA's AI startup challenge. Of the 12 semi-finalists who gave their pitches -- live before an audience of investors and press at NVIDIA's Silicon Valley campus -- six were selected to go on to the finals, to be held on March 27 at GTC, our annual GPU developers conference. There, the two finalists in three categories -- autonomous systems, enterprise and healthcare -- will get winnowed down to a single winner, who will get $330,000. Kicking off the event NVIDIA founder and CEO Jensen Huang said: ""AI is enjoying a revolution: software that writes software, machines that learn by themselves, solving problems that human software engineers had no possibility of addressing until now have finally hit the scene.