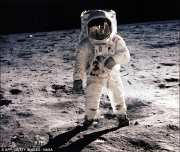 Expert reveals the moon landing would have been IMPOSSIBLE to fake

This month marks the 50th anniversary of when man first set foot on the moon when Apollo 11 landed at the Sea of Tranquillity on July 20 1969. It is one of the most iconic and memorable moments in the history of mankind but is commonly beleaguered with outlandish claims it was an elaborate ruse. Astronauts and academics marvel at the incredulity of the claims and Howard Berry, head of post-production and programme leader for MA Film and Television Production at the University of Hertfordshire penned an article for The Conversation debunking the most common myths. Astronaut Edwin (Buzz) Aldrin, the lunar module pilot, walks on the surface of the moon near the leg of the Lunar Module'Eagle' during Apollo 11's first manned lunar landing on July 20, 1969 It's been half a century since the magnificent Apollo 11 moon landing, yet many people still don't believe it actually happened. Conspiracy theories about the event dating back to the 1970s are in fact more popular than ever.

A stunning interactive 3D map revealing the hidden details of the Apollo moon landings has been released to commemorate the 50th anniversary of the moon landing. Users can visualise exactly where Neil Armstrong, Edwin'Buzz' Aldrin were when they, along with Michael Collins, orchestrated one of the most incredible feats in the history of humankind when their Eagle lander touched down on July 20 1969. Roughly 600 million people are thought to have tuned in to the live broadcast of Apollo 11 and now the grainy television sets can be replaced with the new map. The graphic, developed by Esri UK, using data from Nasa, allows users to follow the different routes taken by Apollonauts from all the successful missions of the programme, which took a total of 12 men to the lunar surface. At each landing site the location of the landing modules, moon buggies, reflectors and experimental equipment are all pinpointed.

Remembering Al Reinert and "For All Mankind," the Precursor to "Apollo 11"

Viewers still coming back down to Earth after watching "Apollo 11," Todd Douglas Miller's new documentary about the spaceflight that first landed men on the moon, might overlook the dedication line in the film's credits: "For Al and Theo." "Theo" refers to Theo Kamecke, the director of the NASA-commissioned documentary "Moonwalk One," from 1972, whose leftover Todd-AO 70-mm. "Al" refers to Al Reinert, the director of "For All Mankind," from 1989, a kaleidoscopic assemblage of Apollo-mission footage narrated by thirteen of the twenty-four astronauts involved. Reinert, who received an Oscar nomination for the film, and another for co-writing Ron Howard's "Apollo 13," died recently, at the age of seventy-one, at home, in Wimberley, Texas. Reinert did not live to see the thirtieth anniversary of his film's release, in January, or the fiftieth anniversary of the moon landing, which will occur in July. But his influence can be seen throughout "Apollo 11," which expands to regular theaters on Friday, following a one-week IMAX run.

The first steps on another world: Celebrating Apollo 11 at 50 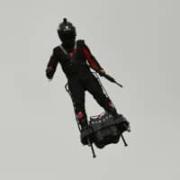 CAPE CANAVERAL, FLORIDA - Half a century ago, in the middle of a mean year of war, famine, violence in the streets and the widening of the generation gap, men from planet Earth stepped onto another world for the first time, uniting people around the globe in a way not seen before or since. Hundreds of millions tuned in to radios or watched the grainy black-and-white images on TV as Apollo 11's Neil Armstrong and Buzz Aldrin set foot on the moon on July 20, 1969, in one of humanity's most glorious technological achievements. Police around the world reported crime came to a near halt that midsummer Sunday night. Astronaut Michael Collins, who orbited the moon alone in the mother ship while Armstrong proclaimed for the ages, "That's one small step for man, one giant leap for mankind," was struck by the banding together of Earth's inhabitants. "How often can you get people around our globe to agree on anything? Hardly ever," Collins, now 88, told The Associated Press in a recent interview.