Melbourne's La Trobe University has detailed findings of what it called successful on-campus trials of Navya's driverless "Autonobus" shuttle, which uses 360-degree cameras and sensor systems to detect objects and runs a set route based on map coordinates. A report on the trial by La Trobe and its project partners includes a number of recommendations, including further trials of the technology; considering autonomous vehicles in future infrastructure planning and investment decisions; and education and engagement of communities on autonomous vehicles. The Autonobus -- which drove students around La Trobe's Bundoora campus as part of a trial until July -- passed every test it went through, including safety, technical, operational, and passenger testing on a pre-programmed route, and interacting with pedestrians, cars, buses, and cyclists, according to Dean Zabrieszach, CEO of project partner HMI Technologies. "No other trial in Australia has tested an autonomous vehicle of this type in such a dense urban location," Zabrieszach said. "We have demonstrated that it can be done safely, without incident, and in compliance with road safety laws."

Put your name down for London's driverless pod trials

The project is using repurposed Ultra Pods, which are already in operation at London's Heathrow Airport. There, the electric four-wheelers run on tracks, shuttling passengers in relative safety. To help make them road-ready, TRL has teamed up with Westfield Sportscars, a classic car builder based in the West Midlands, and Oxbotica, a research-based offshoot from Oxford University's Mobile Robotics Group. The group's mission is to see how the public reacts to driverless vehicles, especially in urban environments where there are plenty of motorists and pedestrians. Successful applicants will be asked to give some feedback about their driverless adventure.

How a raised hand from a pedestrian could stop driverless cars

Should I stay or should I go? An LED display for driverless cars aims to give pedestrians at a crossing the power to communicate with vehicles, signalling for the vehicles to stop or drive on. Blink, created by researchers at the Royal College of Art and Imperial College London, turns the awkward dance of eye contact and hand gestures that happens when a car slows down while someone is waiting to cross the road into something driverless cars could understand. The Blink design integrates an organic light-emitting diode display into the windscreen and rear window of the car and uses light signals to show pedestrians when the car is aware of their presence. If the car's sensors detect a pedestrian nearby, a figure lights up that mirrors their movements, accompanied by a bleep. 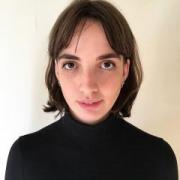 If you're looking to get a taste of the future of transport, then you should head over to Berlin, where a driverless bus has just begun ferrying real-life passengers along a 1,2-kilometre circuit for the first time. The maiden voyage took place at a quarter past ten last Friday morning, as the first computer-controlled bus set off from U-Bahn Alt-Tegel. According to Berlin's transport authority, the BVG, it is the first vehicle of its kind to drive on public roads in Germany's capital city. When you picture an automated vehicle, you might think in sleek lines, futuristic chrome and glass, but the BVG's sunshine-yellow driverless bus is - there's no other word for it - undeniably cute. Rather oddly-proportioned, it is capable of speeds of up to 15 kilometres per hour and can carry a total of six passengers at a time, as well as an attendant - just in case.

Infographic: Are consumers ready for driverless cars and AI?

Driverless car technology has been one of the most anticipated disruptions of a major global industry. Beginning with Google in 2010, the field has expanded to include other tech companies and auto manufacturers, including Uber, Lyft, Tesla, and General Motors. With so many companies jostling to be among the first to integrate artificial intelligence into the world's billion-plus automobiles, the speed with which the wider industry is expected to adopt these cutting edge technologies is impressive. By 2021, sales of connected car technologies are predicted to triple to almost 180 billion. It is not difficult to see why the driverless car industry shows such promise.