The Latest: Reports of Pepper Ball Use Concern Police Chief

Amid their concerns, though, the district attorney said the case against Amber Guyger will get a hard look by her office and be presented to a grand jury, which could decide on more serious charges than manslaughter in last week's shooting of 26-year-old Botham Jean.

MARKETING isn't what it used to be with technology as an option in the toolbox. Conventional approaches that worked just a few years back are largely ineffective now. As the use of artificial intelligence (AI) in marketing rises, so do data privacy concerns. Despite that, AI may be exactly what will overcome data privacy concerns in marketing for businesses. What needs to be clear is that it's not AI that's driving most digital marketing campaigns right now.

Top U.S. diplomat Pompeo stokes concern over North Korea as Abe seeks to avoid being shut out of diplomatic process 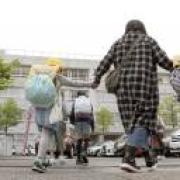 Comments by the top U.S. diplomat Sunday that the main objective of talks with North Korea next month is to eliminate the isolated country's long-range nuclear missile capabilities are likely to raise eyebrows in Tokyo as Japan hustles to avoid being shut out of the diplomatic process. Asked on "Fox News Sunday" about the possibility of the U.S. offering a security guarantee to the regime of North Korean leader Kim Jong Un as part of any possible deal to rid it of its nuclear weapons program, Secretary of State Mike Pompeo said Washington will "have to see how the negotiations proceed" but appeared to focus solely on the threat to the United States. "Make no mistake about it: America's interest here is preventing the risk that North Korea will launch a nuclear weapon into L.A. or Denver or into the very place we're sitting here this morning," Pompeo said from Washington. His comments, just a month ahead of the hotly anticipated July 12 summit in Singapore between U.S. President Donald Trump and Kim, are likely to exacerbate lingering concerns that the mercurial American leader may cut a deal that leaves Japan in the lurch. "U.S. allies will be extremely concerned about statements that seem to suggest the United States cares more about threats to the homeland than to allies," Adam Mount, a senior defense analyst at the Federation of American Scientists in Washington said, adding that such statements would encourage them "to chart their own course."

He said the Night Wolves were "no typical motorcycle club, they carry strong political messages ... The (RS) authorities want to give them legitimacy and use them in an election process," Mektic said, citing reports the Night Wolves planned to open an office in Banja Luka and monitor elections.

African asylum seekers in Israel have voiced concern over Tel Aviv's agreement with the UN to resettle half of them to Western countries. A number of African migrants and asylum seekers told Al Jazeera they remain skeptical that the new plan could bring any real change for those who are to stay in Israel. On Monday Israeli Prime Minister Benjamin Netanyahu's office announced that Israel had reached an unprecedented understanding with the United Nations to help resettle at least 16,250 African migrants in "developed countries like Canada, or Germany and Italy," instead of Africa.. Hours after the announcement, Netanyahu said he would suspend the new plan, which was denounced by right-wingers in his government. Netanyahu wrote in a Facebook post on Monday night that he was putting the agreement on hold until he meets with representatives from south Tel Aviv- where a large number of African asylum seekers live- along with Interior Minister Arye Dery. Confusing matters further, as both German embassy in Israel and the Italian foreign ministry reported to the media that they were not aware of receiving any requests regarding asylum seekers.