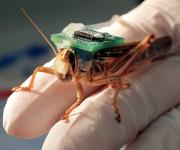 A defense contractor wants to study tiny insect brains as it strives to create capable and efficient forms of artificial intelligence. Defense One reported on a solicitation published by Defense Advanced Research Projects Agency (DARPA), which asked for recommendations on building computers the size of insect brains -- some of which have fewer than 1,000 neurons. Human brains, on the other hand, have somewhere around 100 billion neurons. "Nature has forced on these small insects drastic miniaturization and energy efficiency, some having only a few hundred neurons in a compact form-factor, while maintaining basic functionality," the solicitation reads. "Understanding highly integrated sensory and nervous systems in miniature insects and developing prototype computational models . . .

Aeronautics company Airbus has successfully launched an AI assistant called CIMON into space. The artificial intelligence system is the first to arrive on the International Space Station (ISS) and is powered by IBM's Watson supercomputer and overseen by the German Aerospace Center (DLR) in cooperation with Airbus. CIMON stands for "Crew Interactive Mobile CompanioN" and is a mobile and autonomous system designed to help astronauts with everyday tasks on the ISS, while also providing companionship. CIMON was created using 3D printing and made of plastic and metal. "We are the first company in Europe to carry a free flyer, a kind of flying brain, to the ISS and to develop artificial intelligence for the crew on board the space station," said Manfred Jaumann of Airbus.

The Key to Smarter AI: Copy the Brain

Until AI can learn on the fly as our brains do, it will never be truly intelligent. One avenue to teaching AI to act like the brain is to study the brain itself. At the Defense Advanced Research Projects Agency, we are developing brain-computer interfaces--devices that sit directly in or on the brain and record cell activity, allowing us to see how neural signals translate into actions like movement and speech. We've used this knowledge to enable paralyzed patients to move robotic limbs and regain a sense of touch. First we ask a volunteer with a brain implant to imagine moving her arm.

Boeing creates unit to focus on super-computing that mimics the brain, hack-proof communications 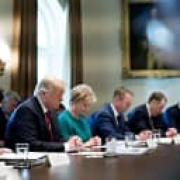 CHICAGO – Boeing Co. is creating a new unit to focus on technology that's seemingly straight out of science fiction, including super-fast computing that mimics the synapses of the human brain and hack-proof communications links based on applied quantum physics. So-called neuromorphic processing and quantum communications, two of the futuristic technologies Boeing wants to explore, may seem an odd fit for the world's largest plane-maker. But such concepts increasingly form the core of aerospace innovation, like the networks that may one day manage millions of airborne drones, said Greg Hyslop, Boeing's chief technology officer. The technology being developed around advanced computing and sensors is going to have a "profound impact" on Boeing, Hyslop said in an interview Wednesday. "We thought it's time to do this."

Why are lawyers using brain damage as a criminal defense? The science doesn't support it

When his criminal trial begins next week, attorneys for Andres "Andy" Avalos, a Florida man charged with murdering his wife, a neighbor and a local pastor, will mount an insanity defense on behalf of their client because, as they announced last summer, a PET scan revealed that Avalos has a severely abnormal brain. In March, shortly after an Israeli American teenager was arrested on suspicion that he made bomb threats against Jewish institutions in the U.S. and abroad, his lawyer declared that the teenager had a brain tumor that might have affected his behavior. Both cases are part of a growing movement in which attorneys use brain damage in service of a legal defense. To support such claims in court, lawyers are turning to neuroscience. The defense brings in hired guns to testify that brain scans can identify areas of dysfunction linked to antisocial behavior, poor decision-making and lack of impulse control.