Trust No One: Inside the World of Deepfakes by Michael Grothaus review – disinformation's superweapon

On the night of Thursday 3 September 1998, a middle-aged community college professor with a history of heart attacks passed out at the wheel of his car on a busy US highway. The car drifted across the lanes and into the rush of oncoming traffic. The collision was so powerful it thrust the engine of the professor's car into the front seats. Miraculously, he survived, and no one else was seriously injured. He recovered from a broken ankle and wrist and left hospital.

In the battle against deepfakes, AI is being pitted against AI

Lying has never looked so good, literally. Concern over increasingly sophisticated technology able to create convincingly faked videos and audio, so-called'deepfakes', is rising around the world. But at the same time they're being developed, technologists are also fighting back against the falsehoods. "The concern is that there will be a growing movement globally to undermine the quality of the information sphere and undermine the quality of discourse necessary in a democracy," Eileen Donahoe, a member of the Transatlantic Commission on Election Integrity, told CNBC in December 2018. She said deepfakes are potentially the next generation of disinformation. 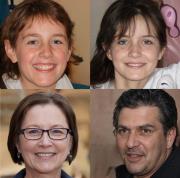 What Deepfakes Actually Are

While it looks like another tale of internet magic, it points to something darker stirring in the internet's depths. This story was originally published August 19, 2019. The video exists thanks to deepfake technology and while its realism is still in its infancy, it's fast becoming one of the most terrifying developments in technology. To better understand how it works and what it means the future, we peeked under the covers. A update to Virginia, U.S.A.'s law against revenge porn banning the distribution of videos and images that have been deepfaked - modified using machine learning algorithms to picture someone else - or otherwise created with the intent to "coerce, harass, or intimidate" a victim went into effect on Tuesday, per CNET.

Deepfake- The Dark Face of AI

Deepfake refers to an AI-based technology which is used to produce or alter the contents of a video, thus showing something that didn't occur in reality. A deepfake video is usually created by using two competing Artificial Intelligence systems. The first system is known as the generator, and the other is called a discriminator. The generator system is used for creating a fake video clip, which in turn asks the discriminator to determine whether the video clip is real or fake. Every time, when the discriminator has accurately identified a fake video clip, the generator receives a clue regarding what not to be done when the next video clip is being created.