Can an open-source AI take on Amazon and Google?

It's only been a few years since Amazon unveiled the Alexa-powered Echo, but since then, smart speakers have become a major consumer-electronics category. Key to its success is the notion of the always-on virtual assistant, which other companies like Apple and Google have adopted as well. In fact, not only has Google made Assistant the driving force behind its Android smartphones, it has launched its own line of Echo rivals. But underneath all of this technology is the potential risk to your privacy. In just the past few months, news reports have uncovered a series of alarming revelations that companies like Amazon, Google and even Apple have been listening in on conversations without permission.

Can Mycroft's Privacy-Centric Voice Assistant Take On Alexa And Google?

Montgomery is the CEO of Mycroft, which for the past few years has been building an open-source alternative to big tech's voice assistants. He doesn't trust any of those companies–not Google, nor Apple, nor Amazon–to protect people's privacy or act in users' best interests.

This is a guest post by the Mycroft team as part of "the startup stories", a series of blog posts about how and why innovative companies are using Ubuntu technology. If you work in technology you've probably had this dream. You wake up and your whole house is a computer, a starship in cyberspace that listens to you, understands you, and performs tasks effortlessly. Mycroft A.I. is achieving that dream using Snappy Ubuntu Core. Mycroft is an open source / open hardware project that is working to bring natural language recognition and Internet of Things (IoT) integration to homes and offices everywhere.

It might bear a passing resemblance to ET, but Mycroft's smart home system is more than a pretty face: it's an attempt to define what it means to be human through technology. The first seeds of the open source home hardware AI platform that was to become Mycroft came to Joshua Montgomery during a refit of a Kansas maker-and-enterpreneurship space he was setting up. Montgomery wanted the building to have the same abilities as the systems seen on classic sci-fi films and series. "It was inspired by the Star Trek computers, by Jarvis in Iron Man," Montgomery told ZDNet. He wanted to create the type of artificial intelligence platform that "if you spoke to it when you walked in the room, it could control the music, control the lights, the doors" and more. 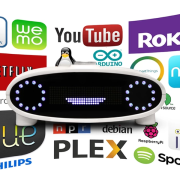 The Amazon Echo is an attempt to usher in a new product category. A box that listens to you and obeys your wishes. Kickstarter creator [Joshua Montgomery] likes the idea, but he wants to do it all Open Source with a Raspberry Pi and an Arduino. The Kickstarter (which reached its funding goal earlier this month) claims the device will use natural language to access media, control IoT devices, and will be open both for hardware and software hacking. The Kickstarter page says that Mycroft has partnerships with Lucid and Canonical (the people behind Ubuntu).