Can Nuclear Power Offer a Way Out of the Climate Crisis?

But public mistrust of the technology remains high, at least in Germany, where the government moved to phase out atomic energy following the 2011 nuclear catastrophe in Fukushima, Japan. Critics argue that nuclear reactors are too expensive and too complex, too inflexible for modern power grids and, above all, far too dangerous. Proponents such as Gates or Myhrvold, on the other hand, want to prove the opposite and are promising a source of almost immeasurable amounts of energy. Engineers, especially in China and the United States, are setting out to rebuild, renovate and reinvent the technology of conventional power plants. At least 40 companies and research institutes are currently working on small, modular reactors or visionary nuclear power plants that they say will be what conventional power plants never could be: clean, economical and safe.

At the very least, we should learn from Germany's costly mistakes. Germany's goal was to cut greenhouse emissions 90 percent by 2050 from 2005 levels. But instead of reducing its reliance on coal and natural gas for electricity production, just the opposite has happened. Following the accident at the Fukushima nuclear plant in Japan, Germany decided to close its nuclear plants. But despite huge subsidies, solar and wind power couldn't replace the lost nuclear power.

Looming climate breakdown is opening fresh divisions among environmentalists over nuclear energy, with a major advocacy group calling for struggling nuclear plants to be propped up to avoid losing their low-carbon power. Nuclear is the single largest source of low-carbon electricity in the US. But a third of nuclear plants are unprofitable or scheduled to close, risking a rise in greenhouse gas emissions if they are replaced by coal or natural gas, a major Union of Concerned Scientists (UCS) report has found. US emissions could increase by as much as 6% if struggling plants are shuttered early, the report warns. This scenario has put pressure on many environmental groups to re-evaluate their intrinsic opposition to nuclear energy as a dangerous blight that must be eradicated. 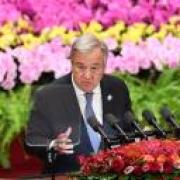 VIENNA – The U.N.'s nuclear agency on Monday said global capacity for electricity generation through nuclear power may shrink over the coming decades. In a new report the International Atomic Energy Agency said that the sector would face challenges as "aging reactors are retired and the industry struggles with reduced competitiveness." "Overall, the new projections suggest that nuclear power may struggle to maintain its current place in the world's energy mix," the IAEA said. In its worst case scenario, nuclear power capacity would fall by more than 10 percent until 2030. Other factors cited as contributing to the squeeze on the sector were the low price of natural gas, the impact of renewable energy sources on electricity prices and the global reaction to the 2011 Fukushima disaster.

Since the Atomic Age exploded into being in the New Mexico desert in 1945, nuclear power has been styled the future of American energy: a wellspring of cheap, reliable and near carbon-free electricity in exchange for a big upfront investment to build each plant. But in the past decade, saddled by a cost crunch some experts say could threaten safety and imperil the world's efforts to slow global warming, nuclear power has had a tougher time than ever delivering on that promise. Natural gas has shouldered much of the blame: The fuel is inexpensive and abundant, the power plants easy to build, the emissions relatively low. Comparatively less attention, however, has been paid to nuclear plants themselves. From 2002-2014, the cost to run the nation's 99 nuclear reactors leapt by 28 percent, the industry's main train group says.