Drones get some bad press, with many associating them with a dystopian future defined by war and surveillance. But now a company is trying to make drones more popular - and in the process improving aerial photography so you can take selfies from the air. The Fotokite Phi is a drone on a leash that you can lead around just like a pet and is now available for pre-order as part of crowdfunding campaign. On a tight leash: 'The Fotokite's tether (pictured) provides a safer, more direct way to fly. It enables close-proximity operations and the tether provides visual accountability for bystanders and property owners,' the Swiss start-up said The drone is now on sale with prices starting at $249 (£159) and can be pre-ordered on their Indiegogo crowdfunding page.

Welcome to the fifth edition of our annual Robot Gift Guide! This year, we bring you a dozen robots that we think will make fantastic holiday gifts. Just as we've done in the past (for a quick trip through recent robotics history, check out the 2012, 2013, 2014, and 2015 editions), this year's selection includes mostly new products released in 2016 but also some items from previous years that we still like. We tested many of these bots ourselves, and you might have seen our in-depth reviews here on the blog. And while we provide prices and links to places where you can buy these items, we're not endorsing any in particular, and a little bit of searching may result in better deals (all prices are in U.S. dollars).

Drones are becoming more common in our skies, performing a variety of tasks, from taking photos to monitoring crops and potentially even delivering broadband. But there are strict rules about their usage, which has led some to come up with innovative ways to fly such vehicles more safely. "I'm using a dog leash for a small dog," says roboticist Sergei Lupashin as he demonstrates a new kind of consumer-friendly drone at the Ted (Technology, Entertainment and Design) conference in Vancouver. By tethering it, he hopes the Fotokite, as it is called, can avoid some of the issues faced by unmanned aerial vehicles (UAVs), which are banned without a special licence because of safety and privacy concerns. "It doesn't rely on GPS [ Global Positioning System], sophisticated machine vision, radio, it doesn't even use a compass.

During his presentation, Dr. Lupashin of ETH Zurich attached a dog leash to an aerial drone while declaring to the audience, "there has to be another way" of flying robots safely around people. Lupashin's creativity eventually led to the invention of Fotokite and one of the most successful Indiegogo campaigns. Since Lupashin's demo, there are now close to a hundred providers of drones on leashes from innovative startups to aftermarket solutions in order to restrain unmanned flying vehicles. Probably the best known enterprise solution is CyPhy Works which has raised more than $30 million. Last August, during President Trump's visit to his Golf Course in New Jersey, the Department of Homeland Security (DHS) deployed CyPhy's tethered drones to patrol the permitter. 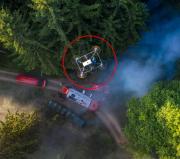 When it comes to emergencies, first responders don't have much time to think, whether it be a fire or search-and-rescue mission, and that's why Switzerland-based Fotokite has developed a fully autonomous tethered drone. Called Sigma, it was built using the NVIDIA Jetson platform and specializes in covering the vast majority of situations where first responders need an aerial perspective during an emergency. Not just a standard autonomous drone, this one comes equipped with a thermal camera capable of determining where a fire is, as well as where the safest location to enter or exit a structure would be. The drone can automatically highlight hotspots that need attention and guiding firefighters on where water is needed most, even through heavy smoke or with limited visibility. Everything from autonomous flight and real-time data delivery to the user interface and real-time streaming is made as simple as pushing a button, which means first responders can focus on saving lives and keeping people safe.