If you want to surf the web with Microsoft's HoloLens 2, you'll be guaranteed to have a browser optimized for the immersive format -- Mozilla is partnering with Microsoft to make Firefox Reality available for the next-gen headset. While it's unclear exactly how much this will vary from the existing browser (above), the developer hopes to learn more about bringing augmented reality material to the web. It'll build on work for existing mixed reality headsets like Magic Leap and run on Mozilla's next-generation Servo platform. Not surprisingly, you'll have to wait a while to try this. There's a prototype of Firefox Reality for HoloLens, but you'll have to wait until summer to use it.

Mozilla is making a 'mixed reality' version of Firefox

Virtual and augmented reality hasn't taken off the way some people had hoped. Still, it's a growing market that Mozilla wants to support with a bespoke version of Firefox. The new browser, called Firefox Reality, will work on a variety of VR, AR and so-called "mixed reality" hardware. There's no word on a release date, though, or what the experience will look like. Mozilla has given a few clues, however; it will be open-source, for instance, and truly cross platform, unlike some of its rivals. 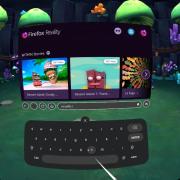 Mozilla on Tuesday released version 1.0 of Firefox Reality, a web browser built expressly to work with standalone virtual reality and augmented reality headsets. The browser is now available in the Viveport, Oculus, and Daydream app stores. Firefox Reality enables users to move between 2D websites and immersive web experiences. As Mozilla said when it announced its work on the browser in April, the browser is open source, enabling manufacturers to add the browser to their platforms. "A desktop is a familiar experience," Dan Brown, marketing lead for emerging technologies at Mozilla, said to ZDNet.

Mozilla is building a version of Firefox for VR headsets. Mozilla has revealed that it is developing a web browser to work with stand-alone virtual and augmented reality headsets. The open-source browser maker said the new browser - Firefox Reality -- will use existing Firefox web technology combined with Servo, its experimental web engine. Mozilla said that while other options for browsing the web already exist for stand-alone headsets, these are closed and platform specific. It wants Firefox Reality to run on a variety of devices and platforms and because the browser - like Firefox - will be open source this will make it easier for manufacturers to add the browser to their platform, and provides an additional level of transparency for users.

Firefox Quantum is ready to speed up your web browsing

Did you ditch Firefox a while ago after feeling that it was slowing down compared to rival browsers like Chrome? Mozilla is determined to win you back. As promised, it just released Firefox Quantum (aka Firefox 57) -- and it promises to be much faster than you're used to. The company claims its newest browser is over twice as fast as the version from 6 months ago thanks to both a new, multi-core CSS engine, tab prioritization and the elimination of bugs that were weighing the software down. Whether or not it's actually faster depends on the sites you're visiting, but it does appear snappy in some quick testing.