Guys on the rise: Assistants who could be head coaches soon 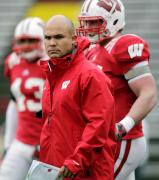 LSU's Les Miles hired Aranda away from Wisconsin, where the 39-year-old oversaw a defense that ranked among the top five nationally in four major categories over the last three years. Aranda's biggest selling point is his ability to relate to his players. He has a knack for making hard-to-digest concepts easy to understand, and then he turns his charges loose to make plays.

In February 2018, Devon Beccera started working at the Tesla Giga factory in Sparks, Nevada. A few months into her employment she was promoted to supervisor, making about $25 an hour. She found out in July that year that she was pregnant, and informed management she planned on taking maternity leave in February, 2019, once she became eligible. Instead, on 14 December 2018, Beccera was fired. "Nevada is a right-to-work state, so they didn't need any sort of reason for firing me, but it was very convenient to fire me two weeks before Christmas, and about 50 days before my maternity leave started," she said.

Circuit Judge Denise Nau (NOW) on Tuesday threw out a single charge of accessory after the fact against 21-year-old Austin Aranda of Cheyenne. Prosecutors accused Aranda of driving the murder suspect out of Cheyenne after the killing.

Chief: Boy Thrown From Mall of America Balcony Being Treated

Court records show that Aranda has a history of convictions for misdemeanor offense. He was charged in two previous incidents at the mall in 2015. Potts said some of those cases were handled through mental health court, but he didn't elaborate. At one point, Aranda had a trespass notice banning him from the mall, but it was no longer in effect, Potts said.

Check out what's clicking on Foxnews.com Dave Aranda sensed something special about Baylor even before the Bears were looking for a new head coach. "I could see the togetherness of the team, I could see the toughness of the team," said Aranda, who as national champion LSU's defensive coordinator saw Baylor on film when the Tigers were preparing last month to play Big 12 champion Oklahoma in a national semifinal game. Baylor is now his team. "When this job came open, I said this is in my heart, this is me," said Aranda, who was formally introduced as coach of the Bears on Monday, four days after being hired as a first-time head coach and a week after LSU finished its 15-0 season.