Modern AI and robotic systems are characterized by a high and ever-increasing level of autonomy. At the same time, their applications in fields such as autonomous driving, service robotics and digital personal assistants move closer to humans. From the combination of both developments emerges the field of AI ethics which recognizes that the actions of autonomous machines entail moral dimensions and tries to answer the question of how we can build moral machines. In this paper we argue for taking inspiration from Aristotelian virtue ethics by showing that it forms a suitable combination with modern AI due to its focus on learning from experience. We furthermore propose that imitation learning from moral exemplars, a central concept in virtue ethics, can solve the value alignment problem. Finally, we show that an intelligent system endowed with the virtues of temperance and friendship to humans would not pose a control problem as it would not have the desire for limitless self-improvement. 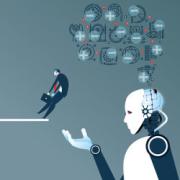 The ethical challenges of AI

Machine learning algorithms are everywhere. It is not just Facebook and Google. Companies are using them to provide personalized education services and advanced business intelligence services, to fight cancer and to detect counterfeit goods. The technology will make us collectively wealthier and more capable of providing for human welfare, human rights, human justice and the fostering of the virtues we need to live well in communities. We should welcome it and do all that we can to promote it.

In this paper we focus on artificial intelligence (AI) for governance, not governance for AI, and on just one aspect of governance, namely ethics audit. Different kinds of ethical audit bots are possible, but who makes the choices and what are the implications? In this paper, we do not provide ethical/philosophical solutions, but rather focus on the technical aspects of what an AI-based solution for validating the ethical soundness of a target system would be like. We propose a system that is able to conduct an ethical audit of a target system, given certain socio-technical conditions. To be more specific, we propose the creation of a bot that is able to support organisations in ensuring that their software development lifecycles contain processes that meet certain ethical standards.

A global panel will consider how to define ethical leadership and the particular challenges posed by emerging technologies in a virtual event from 1-1:45 p.m. ET on Oct. 28. "Defining Ethical Leadership" is free and open to the public. Those who wish to participate may register online. The event is made possible by a grant from Lilly Endowment Inc. to support Leading Ethically in the Age of AI and Big Data, an initiative designed to develop curricula to foster character and ethical values in future leaders, preparing them to respond appropriately to the challenges posed by rapidly evolving technologies, such as artificial intelligence and Big Data management. "As we embark upon the work of our Lilly Endowment grant, a thoughtful conversation about how we define ethical leadership offers an appropriate starting point," said David Reingold, the Justin S. Morrill Dean of Liberal Arts and professor of sociology at Purdue, principal investigator for the grant.