Microsoft is rolling out to Skype Insider testers a preview of the coming end-to-end encrypted private conversation feature.

Opinions expressed by Forbes Contributors are their own. The author is a Forbes contributor. The opinions expressed are those of the writer. Now that much of the hype cycle around 3D printing has dissipated, it's time to start looking at more practical real world applications for additive manufacturing. Sure, you can still buy small 3D printers for home use, but the reality is that they remain largely gimmicks for the nerdiest among us.

NASA starts drop testing Orion with a dummy crew on board

They could then make adjustments and take precautions to prevent astronauts from getting injured during landing based on their findings. These nine tests are meant to assess what the capsule could go through on its way down (while attached to a parachute) in different scenarios. That's why NASA plans to simulate different wind conditions and even wave heights in the future.

A very small fraction of Android users might notice a new button in their Twitter app. According to The Verge, the the company has added a "go live" button that users can see when they compose tweets. It fires up Periscope when you tap it, so you can start broadcasting from within the application. But if you don't have the video streaming app yet, it takes you straight to Google Play. Twitter, which acquired Periscope in 2015, told The Verge that it's rolling out the "go live" button to a small number of users. 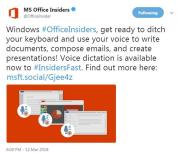 Microsoft officials touted back in January a new voice dictation capability for Microsoft Office. On March 12, Microsoft began testing this feature with its Office Insider testers.The @OfficeInsider account tweeted yesterday: Microsoft officials touted the coming Office dictation technology in January, saying it would be available in February 2018. To test dictating using voice, customers must be running the latest version of Office for Windows (Office 2016) and be an Office 365 subscriber. The voice dictation feature, which uses speech recognition technology to convert speech to text, is available for Word 2016, PowerPoint 2016, Outlook 2016 and OneNote 2016 and in U.S. English only for now. To test this, users must be in the Windows desktop Office Insider program.