BEIJING--Chinese antitrust authorities approved Foxconn Technology Group 2354 1.01 % 's deal to buy troubled Sharp Corp. SHCAY -0.90 %, clearing the final hurdle to one of the biggest takeovers of a Japanese electronics company by a foreign firm. The news on Thursday came as Apple Inc. assembler Foxconn, formally known as Hon Hai Precision Industry Co. 2317 -3.69 %, reported a 31% decline in second-quarter net profit as iPhone sales fell in a maturing smartphone market. Under the terms of the takeover, announced in March, Taiwan-based Foxconn is to pay 388.8 billion yen ( 3.8 billion) for about two-thirds of Sharp. Foxconn was interested in Sharp partly because of the Japanese company's business in making screens for smartphones. Sharp is also a supplier of screens used in Apple's iPhones.

The government-backed INCJ created Japan Display in 2012 by combining display operations from Sony Corp. SNE 1.79 %, Hitachi Ltd. HTHIY 0.30 % and Toshiba Corp. TOSYY -0.37 % The company had an initial public offering in 2014 but quickly ran into trouble, and its stock has been trading at around a fifth of its IPO price of 900 (about 9). INCJ remains Japan Display's top shareholder with a 35.6% stake. Earlier this year, INCJ made a bid to take over Sharp Corp. SHCAY 4.23 %, the other major Japanese maker of smartphone displays. INCJ envisioned combining Sharp's display business with Japan Display, but it was outbid for Sharp by Taiwan's Foxconn Technology 2354 -0.22 % Group.

Apple Interested in Advanced LCDs for Some iPhones in 2018

Apple Inc. AAPL 0.55% has expressed interest in buying advanced liquid-crystal displays from Japan Display Inc. 6740 -1.36% for some iPhones next year, people knowledgeable about the matter said, a sign the technology has life despite competition from a newer type of display. Japan Display said last month that the advanced displays, which it calls Full Active, would account for more than 70% of its business in panels for smartphones and other smart devices in the year ending March 2019. Japan Display has said in a regulatory filing that Apple accounted for about 54% of its revenue in the year ended March 2017. Asked at a Tuesday news conference about customers for the Full Active displays, Kazutaka Nagaoka, chief of Japan Display's mobile unit, said clients so far were mostly Chinese handset makers including Xiaomi Inc., which he said used the panel for its Mi Mix 2 phone. He declined to discuss potential clients from other regions. 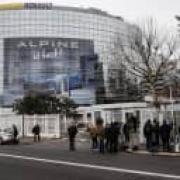 Japan Display Inc. said Friday it has signed a deal to receive an ¥80 billion ($715 million) capital injection from a group of Chinese and Taiwanese firms, leaving its revival, initially planned under a Japanese government-backed fund, in the hands of foreign companies. Japan Display, a key supplier to Apple Inc., said China's Silk Road Fund and Harvest Tech Investment Management, as well as Taiwan's TPK Holdings and Fubon Financial Holdings, will together own 49.8 percent of its shares once payment is made by Dec. 30. In addition, state-backed INCJ Ltd. will convert part of its commitment lines and other debts in Japan Display to preferred shares, boosting the display maker's capital by ¥117 billion in total. The ailing manufacturer, created in 2012 by the government-sponsored merger of the display operations of Sony Corp., Hitachi Ltd. and Toshiba Corp., has tried to expand with support from INCJ. Japan tried using public funds to support the manufacturer as one of its prominent technology firms, but failed amid fierce price competition with rivals in South Korea and China.