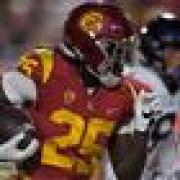 Eddie Krawiec wrapped up his fourth Pro Stock Motorcycle season title and first since 2012 by qualifying Saturday at the season-ending Auto Club NHRA Finals. Krawiec powered his Harley Davidson to a 6.781-second pass at 197.68 mph to earn his sixth No. 1 of the season and 29th of his career. He has seven victories this season. "All the guys that stand behind me when I'm on my motorcycle and make it go up and down the dragstrip as fast as it does. What makes it really special is I have my father, my wife and my little girl, Kayden, at home.

Justin Allgaier won all three stages and the NASCAR Xfinity Series race Sunday at Iowa Speedway for his second victory of the season. Racing for Dale Earnhardt Jr. in JR Motorsports' No. 7 Chevrolet Camaro, Allgaier led 182 of 250 laps and survived an unlucky late caution by winning the restart. Christopher Bell pushed Allgaier throughout the final stage -- at times closing to within a tenth of a second of taking the lead -- but finished second. Allgaier also won last month at Dover. He has seven career victories.

William Byron got his second win of the season, and this time he got to do it in front of his bosses. Byron won his second consecutive Xfinity Series race on Saturday by leading a 1-2 finish at Daytona International Speedway for JR Motorsports. Byron raced to his first career Xfinity victory last weekend at Iowa, but team owners Dale Earnhardt Jr. and Rick Hendrick weren't at the track to see him. This time, Hendrick was the first person to the window of his car in victory lane. The 19-year-old became the youngest series winner at Daytona.

Aric Almirola earned the third Xfinity Series victory of his career Saturday by holding off a hard-charging pack in the closing laps at Talladega Superspeedway. He knew just minutes into practice at Talladega that he had a Ford capable of winning. "We ran about 10 laps in practice and I said, 'Put it on jack stands. This thing is fast,'" Almirola said. The car was indeed fast, and Almirola used a fuel-only stop to earn his first series victory since Daytona last year.

There will not be an eighth NASCAR title for Jimmie Johnson and Chad Knaus. Hendrick Motorsports will split the driver and crew chief -- the longest pairing in NASCAR -- at the end of a disappointing season. Johnson has not won a race in 17 months and was knocked out of the playoffs in the first round. Johnson and Knaus won their record-tying seventh championship in 2016 but have slumped in the two years since. "It's no secret that Chad and Jimmie have experienced their ups and downs over the years," owner Rick Hendrick said.