A Scottish government minister has called for an end to the hunting of wild goats on Islay. Mike Russell was responding to social media posts showing American TV presenter Larysa Switlyk posing beside dead goats on the island. Ms Switlyk, who describes herself as a "hardcore huntress", hosts the Larysa Unleashed programme. Mr Russell, who is the local MSP for the area, told BBC Scotland that the images were "horrific". He said he had contacted Scotland's environment secretary, Roseanna Cunningham, to call for goat hunting to be "stopped immediately" on the island.

An American TV host who sparked anger after shooting a wild goat on Islay has criticised "ignorant people" who sent her death threats on social media. Larysa Switlyk, who presents the Larysa Unleashed programme, posted pictures of herself posing with the dead goat on a hunting trip to the Scottish island. The hunt was legal - but sparked outrage on social media. The thousands of replies sent to Ms Switlyk included some calling for her to be killed. Ms Switlyk is understood to have been in Scotland a month ago, but only posted the pictures of the dead goat on Tuesday. 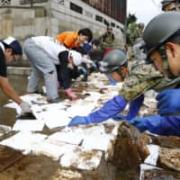 While local police officers were on high alert for anti-whaling campaigns, 12 boats left the town's port around 5 a.m., but all returned without catching any, according to a fisheries cooperative official. The hunting method, in which fishermen herd dolphins and small whales into a cove before sealing the area with a net, has drawn fierce criticism from animal-rights groups at home and abroad. As a member of the International Whaling Commission, Japan halted commercial whaling in 1988 but hunted whales for what it called research purposes, a practice criticized internationally as a cover for commercial whaling. Japan had long sought to lift the moratorium and finally left the IWC on June 30 after the organization last year voted down its proposal to resume commercial whaling of species considered abundant, such as minke whales. Hunting dolphins and other small cetaceans in waters near Taiji was not subject to controls by the IWC, although critics have said the technique is cruel and it has become the subject of an Oscar-winning documentary.

Wolves and bears to be slaughtered in Romania once again

The hunting of bears and wolves is back on the agenda in Romania, less than a year after the government banned trophy hunting. Conservation groups have condemned the U-turn and are calling on the government to rescind the decision. The move was announced on 5 September by Romania's environment minister Graţiela Gavrilescu. It will allow up to 140 bears and 97 wolves to be killed "under supervision" by the end of 2017, if they're deemed to be "nuisance animals" that threaten livestock on farms or frighten people by encroaching into inhabited areas. But the conservation groups fear that the quotas will be used as an excuse to allow trophy hunting to resume.