Matching pursuit (MP) methods are a promising class of feature construction algorithms for value function approximation. Yet existing MP methods require creating a pool of potential features, mandating expert knowledge or enumeration of a large feature pool, both of which hinder scalability. This paper introduces batch incremental feature dependency discovery (Batch-iFDD) as an MP method that inherits a provable convergence property. Additionally, Batch-iFDD does not require a large pool of features, leading to lower computational complexity. Empirical policy evaluation results across three domains with up to one million states highlight the scalability of Batch-iFDD over the previous state of the art MP algorithm. 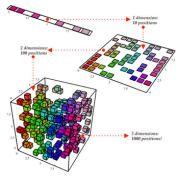 Your data is the life-giving fuel to your Machine Learning model. There are always many ML techniques to choose from and apply to a particular problem, but without a lot of good data you won't get very far. Data is often the driver behind most of your performance gains in a Machine Learning application. Sometimes that data can be complicated. You have so much of it that it may be challenging to understand what it all means and which parts are actually important.

The Distribution Family of Similarity Distances

Assessing similarity between features is a key step in object recognition and scene categorization tasks. We argue that knowledge on the distribution of distances generated by similarity functions is crucial in deciding whether features are similar or not. Intuitively one would expect that similarities between features could arise from any distribution. In this paper, we will derive the contrary, and report the theoretical result that $L_p$-norms --a class of commonly applied distance metrics-- from one feature vector to other vectors are Weibull-distributed if the feature values are correlated and non-identically distributed. Besides these assumptions being realistic for images, we experimentally show them to hold for various popular feature extraction algorithms, for a diverse range of images. This fundamental insight opens new directions in the assessment of feature similarity, with projected improvements in object and scene recognition algorithms. Erratum: The authors of paper have declared that they have become convinced that the reasoning in the reference is too simple as a proof of their claims. As a consequence, they withdraw their theorems.

Abstract--This paper explores using a Long short-term memory (LSTM) based sequence autoencoder to learn interesting features for detecting surveillance aircraft using ADS-B flight data. An aircraft periodically broadcasts ADS-B (Automatic Dependent Surveillance - Broadcast) data to ground receivers. The ability of LSTM networks to model varying length time series data and remember dependencies that span across events makes it an ideal candidate for implementing a sequence autoencoder for ADS-B data because of its possible variable length time series, irregular sampling and dependencies that span across events. The motivation for this research was inspired by the original research presented by Richards, MacDonald-Evoy, and Hernandez in their "Tracking Spies In The Skies" talk at DEF CON 25 [1]. The goal of their research is to leverage ADS-B (Automatic Dependent Surveillance - Broadcast) data that is broadcast by commercial and private aircraft to detect surveillance aircraft.

Recently I checked again the Word Models interactive paper. They use a VAE to compress 64x64x3 images to 32 dim latent vectors. But on the site there is an interactive demo where I can set 15 values of the latent vector which will be decompressed. The question is, how can I rank the features by reconstruction variance (or I don't really know how to call this)?