The Arabic-language Al Bayan newspaper and the television channel Dubai One reported the arrests, while Dubai police did not answer repeated calls for comment. The arrests come as the United Arab Emirates, which hosts some 4,000 U.S. troops fighting the Islamic State group, remains a crucial regional ally.

Dubai hopes to have a human-free police station by 2030

Is robot policing the way of the future? Dubai is well on its way to finding out. The emirate, one of seven in the UAE, is taking a technological leap of faith this week as it introduces its first robot officer to the Dubai police force. Designed by the Spanish company PAL Robotics, the specialized REEM robot stands 5 feet 6 inches high and looks like a knight in shining white plastic armor, riding in on its wheels (rather than a horse). This is just the first step for the Dubai police department. 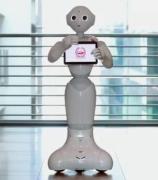 Dubai: A robot has joined Dubai Police to raise awareness about dangers of drug abuse.

While American police struggle to equip officers with body cameras, Dubai's police continue to drift further into the future and make the world's authorities red with envy. The Dubai Police have begun training crews to ride Hoversurf's S3 2019 Hoverbike, an electric vertical take-off and landing (eVTOL) vehicle capable of hovering above the ground and speeding forward. They're not unlike the speeder bikes seen in Star Wars: Return of the Jedi. SEE ALSO: Elon Musk is playing superhero again. According to CNN, the Dubai Police has started training two crews to ride the Hoverbike as part of a "first responder unit used to access hard to reach areas."

Real-life Robocop: Dubai to get android police force by 2017 (VIDEO) A robocop prototype worked the room at Dubai's annual computer and electronic trade show taking place this week. The robot patroler was able to salute and shake the hands of attendees. A touchscreen on the robot's body can be used to report crime and pay fines for traffic violations, Gulf Business reports. It can also scan faces. Gitex 2016: Dubai Police Robot to enter service from next year pic.twitter.com/Jl7OuSXcWx