Hudson Institute senior fellow Michael Pregent says he believes without a doubt that Iran was involved in the attacks on Saudi oil facilities. Saudi oil sites attacked on Saturday -- in a drone assault linked to Iran -- were seen to have sustained damage after satellite images released Sunday captured char marks and smoke billowing from the world's largest oil processing facility. The weekend attack ignited huge fires at Saudi Aramco's Abqaiq oil processing facility and interrupted about 5.7 million barrels of crude oil production -- over 5 percent of the world's daily supply. U.S. satellite images appeared to show approximately 17 points of impact on key infrastructure at the site after the attack. While Yemen's Iran-backed Houthi rebels have since claimed responsibility for the attack, the U.S. has accused Iran of launching the assault.

Rebecca Grant: After Saudi Arabia is attacked, will US military attack Iran? Here are options

Hudson Institute senior fellow Michael Pregent says he believes without a doubt that Iran was involved in the attacks on Saudi oil facilities. Only the Iranians, the world's worst diplomats, would mastermind a significant attack on Saudi Arabia's oil facilities just days before the United Nations General Assembly opens. Yet that's what all signs point too. Secretary of State Mike Pompeo tweeted after the Saturday attack that "Iran has now launched an unprecedented attack on the energy supply. There is no evidence the attacks came from Yemen."

Saudi authorities attempt to control a fire at an Aramco factory. The world's largest oil processing facility and a nearby oil field in Saudi Arabia were set ablaze early Saturday morning after reported drone attacks by Iranian-backed Yemeni rebels. The Interior Ministry was quoted by state-run media as saying the fires at the Abqaiq oil processing facility in Buqyaq and the nearby Khurais oil field operated by Saudi Aramco were "targeted by drones." It wasn't immediately clear if there were any injuries, nor what effect it would have on oil production in the kingdom. Smoke is seen following a fire at Aramco facility in the eastern city of Abqaiq, Saudi Arabia, September 14, 2019. 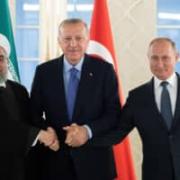 RIYADH – The weapons used to strike Saudi oil facilities were Iranian-made, the Riyadh-led coalition said Monday, heightening fears of regional conflict after the U.S. hinted at a military response to the assault. The weekend strikes on Abqaiq -- the world's largest oil processing facility -- and the Khurais oil field in eastern Saudi Arabia have roiled global energy markets sending prices spiking Monday. Yemen's Iran-aligned Houthi rebels claimed responsibility for the strikes but Washington has squarely blamed Iran, with President Donald Trump saying the U.S. is "locked and loaded" to respond. Saudi's energy infrastructure has been hit before, but this strike was of a different order, abruptly halting 5.7 million barrels per day (bpd), or about 6 percent of the world's oil supply. The Saudi-led coalition, which is bogged down in a five-year war in neighboring Yemen, reiterated the assessment that the Houthis were not behind it, pointing the finger at Iran for providing the weapons.