BANGKOK (Reuters) - Thailand will ban imports of 432 types of scrap electronics within six months, an environment ministry official said on Thursday, the latest country to respond to China's crackdown on imports of high-tech trash this year.

A 100-meter floating barrier will be tested in the North Sea in an attempt to catch and remove plastic pollution from the world's oceans. A nonprofit foundation based in the Netherlands has launched a prototype for one of the most ambitious sea-cleaning projects yet. The innovative idea is a floating barrier that will gather the mass of plastic bits from bottles, bags, fishing nets and other trash that sloshes around in the oceans, growing every year. Once deployed, the extremely long barrier could eliminate the need for an army of boats to haul our garbage back to shore. "This is a big step toward cleaner oceans," says Allard van Hoeken, chief operating officer of The Ocean Cleanup. 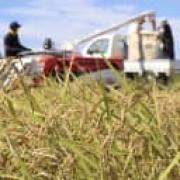 China's ban on imports of plastic waste is forcing other nations, including Japan and the United States, to scramble for new ways to deal with their trash, including exporting recyclable waste to Southeast Asia. But instead of finding solutions, it appears the problem has only gotten worse, especially with the exploitation of developing countries, including Malaysia and Vietnam, that lack the regulatory infrastructure to prevent illegal dumping. The ripple effects of developed nations being banned from shipping their scraps to China, previously the world's biggest importer of plastic waste for recycling, have also surfaced in Japan. Waste management companies are being flooded with requests to handle the extra plastic waste, but many have reached their legal limits. "The storerooms of intermediary companies are filled to the brim with garbage from businesses and factories," said one official at a waste management company in Kanagawa Prefecture.

Cimaja, Indonesia - Pro surfer Dede Suryana drops into an 8ft wave face, turns hard at its base and pulls into a barrel. Seconds later he emerges from behind the curtain of water, into the early morning sun. By the shore, palm fronds sway gently in the offshore breeze and swallows dart from tree to tree. At first glance it's a tableau of West Javan paradise, but look closer and other details catch the eye. A used Pocari Sweat bottle bobs, wrappers for Indo Mie instant noodles float nearby, and a limp plastic bag drags on another surfer's leg rope.

Why Does Half of the World's Used Plastic End Up in China?

On Wednesday, researchers at the University of Georgia published a study based on United Nations data that predicts the world will have 111 million metric tons of excess plastic trash by 2030 that no one currently knows where to put. That's because China, which has imported almost half of the world's waste plastic in the past two decades, began imposing a ban on various types of "foreign garbage" in 2018 as part of an anti-pollution campaign. Why was China importing so much used plastic in the first place? China had a wealth of cheap labor that could profitably refashion scrap plastic for the manufacturing of sandals, phones, bottles, hoses, and other products. Cargo ships began importing large quantities of waste in the 1980s and 1990s, when the country was riding high on a wave of reforms that had lifted many of the government's controls on the economy and allowed the private sector to thrive.