Technology keeps evolving with every passing day. As it turns out, Artificial Intelligence has found its way into the core of our lives for quite some time now. Over the years, a good number of AI movies have been made with technology being the subject. Here's a list of top 10 artificial intelligence movies that you can watch and definitely not regret watching them. This is a story of a young coder who's expecting a vacation prize from his boss.

Have you seen all of Rotten Tomatoes' 200 essential movies?

Ever had one of those evenings where you decide to watch a movie, only to spend so much time trying to decide on a movie that by the time you've picked one, you no longer have time to watch a movie? Sure you have -- we've all been there. But maybe this will help the next time you find yourself in that situation. SEE ALSO: 5 movies we're looking forward to in 2017 Fandango and Rotten Tomatoes have teamed up to create the "200 Essential Movies to Watch Now" challenge – basically a list of 200 titles hand-picked by Rotten Tomatoes editors and ranked in order of their Tomatometer scores. We are obsessed with movies so a lot of love went into creating this list.

Artificial intelligence (AI) has long been a staple of science fiction, but in recent years, technology has improved to the point where real-world AI systems have become usable. In fact, Markets and Markets predicts that that the worldwide market for AI systems could be worth $16.06 billion by 2022. Interestingly, as AI becomes a bigger part of daily life, it also seems to be playing a bigger role in the entertainment industry. Already this decade, filmmakers have put out at least 30 feature films featuring an A.I. character in a key role. By comparison, our research turned up just 19 notable AI movies from the 2000s, 14 from the 1990s and 10 from the 1980s.

Movie Recommendation: Should I trust IMDb? 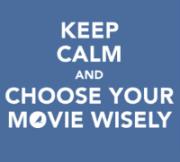 Hi there, nice comments about the top 12 secret shortcuts of Dataiku DSS convinced me to write another one: this time it's about plugins, movies, APIs, and how to choose the best one to watch with friends. A friend of mine has a list of all her DVDs (and takes note of who borrowed what;-). How do I choose the top 5 movies I'd like to borrow? I'm not a movie maniac and I don't know most of the titles of her collection. And when I do know one, it's most often because I have already seen it (and would prefer to watch a new one).