BERLIN – The European Aviation Safety Agency has tightened a nearly month-old directive ordering inspections of some fan blades in engines like those used on a Southwest Airlines jet involved in a fatal accident. A directive published by EASA late Friday called for inspections within 20 days of blades in the oldest CFM56-7B engines -- those that have been through 30,000 engine cycles or more since installation. Newer blades will have to be inspected within 133 days, and the inspections repeated within 3,000 cycles. A March 26 directive called for ultrasonic inspections within nine months. The updated instructions cited a "further failure" of a CFM56-7B fan blade. 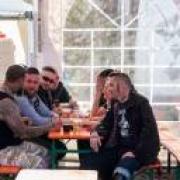 NEW YORK – The Federal Aviation Administration on Friday ordered emergency inspections of jet engines like the one that ruptured during a recent Southwest Airlines flight, leaving a passenger dead. "Fan blade failure due to cracking, if not addressed, could result in an engine in-flight shutdown, uncontained release of debris, damage to the engine, damage to the airplane and possible airplane decompression," the regulatory authority said. In line with recommendations made earlier by engine maker CFM, the FAA ordered that all CFM56-7B engines that have performed 30,000 or more total accumulated flight cycles be inspected within 20 days. That affects about 352 engines in the United States, or 681 worldwide. Each inspection of the engines, which power Boeing 737 aircraft, takes about four hours, according to CFM International, a joint venture between America's GE Aviation and France's Safran Aircraft Engines.

CFM is calling on airlines operating the CFM56-7B, which powers current-generation Boeing 737s, to carry out ultrasonic inspections within the next 20 days on fan blades which have been used in more than 30,000 cycles, it said in a statement.

Ofsted is warning of a hard core of persistently underachieving schools in England which struggle to recruit teachers and keep head teachers.

With 41 percent of the FDA's staff furloughed, 2/3rds of food safety inspections are not being done; national correspondent William La Jeunesse reports from Los Angeles. The Food and Drug Administration said it will resume inspections of some of the riskiest foods such as cheeses, produce and infant formula as early as Tuesday. The routine inspections had been briefly halted as a result of the partial government shutdown. FDA Commissioner Scott Gottlieb said Monday that the agency is bringing back about 150 unpaid employees for the inspections. Riskier foods account for about a third of the agency's roughly 8,400 routine inspections each year.