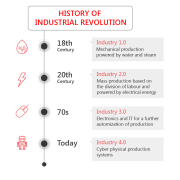 The wave of technological changes is fast sweeping across multiple fronts. The rapid adoption of transformative technologies such as machine learning and artificial intelligence is putting us on the cusp of a new digital age. While we keep adding every'digital progress story' to the list of the'next big thing', another technological advancement in the physical space also has immense potential to disrupt the status quo. Robotics is indeed realigning the rich human talent pool, altering ways in which we operate. One of the most prominent examples is robotics in manufacturing.

AI And Big Data: The Future Of The Digital World

On May 15th, the Global X Future Analytics Tech ETF (AIQ) began trading on Nasdaq. The Global X Future Analytics Tech ETF (AIQ) seeks to invest in companies that potentially stand to benefit from the further development and utilization of artificial intelligence (AI) technology in their products and services, as well as in companies that provide hardware facilitating the use of AI for the analysis of big data. AIQ is the 7th ETF in Global X's Thematic Tech suite of ETFs. AI & Big Data is emerging as one of the most potentially disruptive themes in the digital world. As the world's data grows exponentially, AI capabilities are tracking close behind, the far-reaching implications of which are becoming clearer every day.

Significant technological advancements and societal shifts occurred during the 2010's decade. Yet many of these developments became so quickly engrained in our daily lives that they often went relatively unnoticed, and their impact all but forgotten. Over this next decade, the 2020s, we expect similar rapid and meaningful advancements to occur. Moore's law suggests that over a 10-year period, semiconductors will advance by 32 times, bringing about mesmerizing innovation in the digital age that should not only change technology but society as well. In this piece, we review the technological advancements over the last decade and anticipate what revolutionary changes may be in store for us over the next 10 years.

Should economists be worried about artificial intelligence?

This post highlights some of the possible economic implications of the so-called "Fourth Industrial Revolution" -- whereby the use of new technologies and artificial intelligence (AI) threatens to transform entire industries and sectors. Some economists have argued that, like past technical change, this will not create large-scale unemployment, as labour gets reallocated. However, many technologists are less optimistic about the employment implications of AI. In this blog post we argue that the potential for simultaneous and rapid disruption, coupled with the breadth of human functions that AI might replicate, may have profound implications for labour markets. We conclude that economists should seriously consider the possibility that millions of people may be at risk of unemployment, should these technologies be widely adopted.

The reality will lie between these two extremes. Based on research gathered from surveying Asian business leaders and human resources and AI professionals, this report argues that AI's future will cleave much more closely to the positive outcome. Moreover, this future appears to be approaching quickly: advances in deep learning and the rapid expansion of process automation in such diverse sectors as manufacturing, transportation, and financial services mean that AI's impact is growing exponentially with each passing year. Decision makers in all organizations must now begin to understand how AI will alter their own operational processes and those of suppliers, partners, and customers. Asia's business landscape is poised not only to benefit greatly from AI's rise, but also to define it.