Neil Armstrong's boot sold for $48,000 as part of an out of this world 'space auction'

A boot worn by Neil Armstrong has sold for $49,000 (£38,000) as part of an auction of space memorabilia. The prototype Apollo A7L lunar boot never went to the moon with the astronaut but it is believed it was used in a different flight or served as a backup. It is embroidered with'Armstrong' on the inside of the tongue and has a silver, gold and blue exterior. Parts of the shoe are believed to have been re-purposed by the designers and used on other NASA items. A host of other items also sold at the auction including a Soviet space suit, a signed picture of Neil Armstrong and a series of Apollo 11 engineer's manuals.

Nasa's chief astronaut trainer: 1st person on Mars should be a woman

In total twelve people have walked on the moon. Neil Armstrong made history by becoming the first person to set foot on the moon. Edwin'Buzz' Aldrin followed Neil Armstrong on to the surface of the moon. His popular nickname gave itself to the animated characte Buzz Lightyear. Pete Conrad and Alan Bean were the moon walkers on the Apollo 12 mission.

Listen To NASA's Recordings From The Apollo 11 Moon Landing Mission

If you are too young to have watched along with the rest of the world as Americans went into space and landed on the moon for the first time, or if you just miss the glory days, a new project can send you back in time.

7 Iconic NASA Photos Taken By Astronauts On The Moon 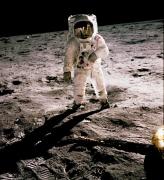 Earlier this week was the 48th anniversary of the day astronauts Neil Armstrong and Buzz Aldrin became the first humans to walk on the moon. Between their groundbreaking Apollo 11 mission and the few moon-reaching ones that came after, a dozen American men have set foot on the Earth's best friend -- and taken loads of photos to document their journeys. Some of the most iconic images snapped by people who were not on our planet's surface include the famous "blue marble" image of the Earth that shows its natural beauty and demonstrates just how small we are in the great expanse of the universe. But the pictures taken from the surface of the moon, although not all examples of expert photography, belong in a category of their own because of what they represent. Neil Armstrong captures an image of Buzz Aldrin as the pair become the first humans to walk on the surface of the moon.

Trump administration officials are pledging to send Americans back to the moon – and then on to Mars. Vice President Mike Pence told a meeting of the National Space Council, the first such session since 1993, that the U.S. 'will return American astronauts to the moon.' 'Not only to leave behind footprints and flags, but to build the foundations we need to send Americans to Mars and beyond.' Space industry leaders say they and NASA are building the spaceships to get there. And they're promising that in five years, astronauts could be working around the moon – but not quite land there yet. SPACE CADEWT: Vice President Mike Pence spoke Thursday during the National Space Council's first meeting since 1993 Pence served on the NASA subcommittee during his days in the House of Representatives, and has spoken often about watching rocket launches on TV as a child.