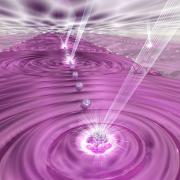 Quantum simulator with 51 qubits is largest ever

A team in the US has created a simulator with 51 quantum bits – the largest of its kind so far. Mikhail Lukin at Harvard University announced the achievement on 14 July at the International Conference on Quantum Technologies in Moscow. Quantum simulators are used to model the minute behaviour of molecules, and could help study how drugs act within the human body. They aren't full-blown quantum computers, though, says Simon Devitt at Macquarie University in Sydney. Lukin's system was specifically built to solve one equation that models the interactions between certain atoms.

Microsoft offers developers a preview of its quantum computing kit

Developers hoping to get on the quantum computer train early can now get started with Microsoft's Quantum Development Kit, a free preview version of which was released today. The kit, which was first announced at Microsoft's Ignite conference in September, includes the Q# programming language, a quantum computing simulator that can simulate 30 logical qubits of power and a companion collection of documentation, libraries and sample programs that will help developers get a better foothold on the complex science behind quantum computing.

A circular solution for quantum simulation

Quantum simulation can map challenging problems in complex materials onto better defined ones in simpler, easier-to-manipulate systems. Physical implementations range from trapped ions to superconducting qubits, each having distinct strengths and weaknesses. Nguyen et al. propose a quantum simulator that seems to combine many of the best features of the existing simulators in one system, while being within current experimental reach. The simulator is based on circular Rydberg atoms--with a highly excited electron orbiting the nucleus along a roughly circular path--where the atoms can be trapped by laser light, can be read out one by one, and have very long lifetimes. The interactions between such atoms would make it possible to simulate some of the most challenging problems in many-body physics.