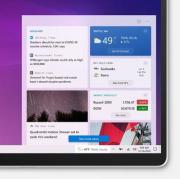 Microsoft is starting to test a potential new Windows 10 feature called "News and Interests" in the Windows 10 Insider Dev Channel. The feed of news, weather and other information can be personalized and, more importantly, completely turned off for those not interested in having this kind of widget accessible directly from their taskbars. Today's Windows 10 Dev Channel build, No. 21286, is from the RS_Prerelease ring. That means this feature is on the list of things that might (or might not) show up in some future Windows 10 feature release. I'd guess it'll be in Windows 10 21H2, due this fall, if it makes it past testing.

Microsoft: This new Windows 10 preview is just to test how quickly we can issue builds

Microsoft has released a new Windows 10 preview, build 20279 for Windows Insiders in the Dev Channel – but the point of release is to allow Microsoft to test its update capabilities rather than offer new features or fixes. "We wanted to test our ability to quickly follow up a flight with another flight," Microsoft Windows Insider program manager Brandon LeBlanc noted in a blogpost. The latest preview today is from the Iron (Fe) branch and contains very few changes to preview build 20277 that it flighted last week to users in the Dev Channel. LeBlanc also offered an update on which of the branches users in the Dev Channel should be receiving. "We are working on getting a new build out to those Insiders soon.

Microsoft unveils a new addition to the Windows taskbar: A news and weather feed

Microsoft's latest Windows 10 Insider build adds a significant number of features to Windows 10, including weather and news widgets in the taskbar, new storage settings, and some additional command-line tweaks. They're all part of Windows 10 Insider Build 21286, released in the Windows 10 Dev Channel. Technically, the features in this build are sample code, and there's no guarantee that these features will ever come to pass. The "news and interests" taskbar addition looks polished enough, however, that it could potentially be part of a reported UI redesign due to arrive in Windows, known as "Sun Valley." Microsoft will make the new build available to all Insiders who subscribe to the Dev Channel.

Windows 10 fans can now grab the latest preview update for version 20H2, and Microsoft has released new optional cumulative updates for Windows versions 1909 and 1809. For Windows Insiders, Microsoft has released the 20H2 Build 19042.782 It was the version of Windows 10 released in September 2020. The 20H2 Build contains dozens of fixes for Windows components, including fixes for Internet Explorer 11, Microsoft Intune, BitLocker encryption, Azure Active Directory, Microsoft Endpoint Configuration Manager, and memory issues with LSASS.exe. The non-security update KB4598298 is for those on Windows 10 version 1909 (and specifically not for version 1903, which ran out of support in December).