Jim Carrey to play villain Robotnik in "Sonic The Hedgehog." Sources said Carrey is negotiating to star in the Paramount film in the role of Robotnik, a villain in the live action/CGI adaptation of the hit Sega video game. Pic stars James Marsden and Tika Sumpter and is directed by Jeff Fowler. Neal Moritz, Mie Onishi and Tim Miller are producers. Pat Casey & Josh Miller wrote the script.

'Sonic The Hedgehog' Movie Set For 2019 With Marsden To Star

Billed as "the fastest thing alive," Sonic the Hedgehog was created and produced by Sega nearly thirty years ago. After over a quarter century as a gaming icon, Sega's "Sonic the Hedgehog" will finally get his due on the silver screen. Variety reported on Wednesday night that Paramount's planned "live-action/animation" hybrid film will star Westworld's James Marsden and be executive produced by Deadpool director Tim Miller. The yet-untitled picture is due for release on Nov. 15, 2019. Paramount secured the film rights to the game in 2017 and appointed director Jeff Fowler to helm the project.

The Sonic live-action hybrid movie is happening, whether you like it or not. Not only has Jim Carrey confirmed that he's playing the villainous Doctor Eggman Robotnik, the project has also found its lead voice actor. According to Variety, Parks and Rec actor Ben Schwartz will voice the speedy hedgehog. While he's probably most known for his role in the show, House of Lies and various comedy skits, Schwartz also has considerable experience in voice work. He served as voice consultant for Star Wars: The Force Awakens, lent his voice to BB-8 and a character in BoJack Horseman, currently plays Dewey in DuckTales and will soon be heard as Leonardo in Rise of the Teenage Mutant Ninja Turtles.

Jim Carrey Is In Talks To Play Dr. Robotnik In The New 'Sonic The Hedgehog' Movie

The 'Sonic the Hedgehog' movie trailer is here, and fans have some issues with it 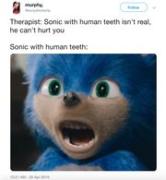 Video game icon, Sonic the Hedgehog, joins forces with his newfound human friend to try and stop Dr. Robotnik's plans for world domination. In a blue, furry flash, the first trailer of the live-action movie "Sonic the Hedgehog" finally arrived. On Tuesday, Paramount released the first look at what a real-world movie based on the beloved video game franchise from publisher Sega might look like. A screenshot of a tweet referencing the first trailer for the upcoming film'Sonic the Hedgehog,' based on the classic video game character. All the classic hallmarks of Sonic the Hedgehog are present, including his transformation into a blue ball, speeding down highways with jolts of electricity strong enough to knock out power across parts of the United States.