A passenger on the ill-fated Southwest Airlines flight from New York to Dallas on April 17 that involved an engine explosion and a rare fatality is suing the airline, according to reports. After the traumatic events that led to an emergency landing, Lilia Chavez filed a lawsuit Thursday against Southwest Airlines in U.S. District Court in Philadelphia. According to the suit, Chavez suffered physical injuries from the flight, as she was seated three rows behind the smashed window that killed passenger Jennifer Riordan. Chavez also claims to deal with depression and post-traumatic stress disorder from the incident. Chavez had to make contact with her children to tell them she might die on the plane, adding to the distress of the situation, the lawsuit said.

A Belgian Army soldier stands outside Central Station after a reported explosion in Brussels on Tuesday, June 20, 2017. Belgian media are reporting that explosion-like noises have been heard at a Brussels train station, prompting the evacuation of a main square.

A witness says 18 are dead after an explosion at a gas depot in Nigeria; dozens of other people were burned. A gas depot exploded in central Nigeria, killing 18 people and leaving some burned beyond recognition, a witness said Monday. More than 40 other people had burns after the blast in Lafia, the capital of Nasarawa state, taxi driver Yakubu Charles told The Associated Press. He said he helped to evacuate victims after more than a dozen occupied vehicles were set on fire. Victims had to be taken to hospitals on motorbikes as no ambulances were available, he said.

Reports of an explosion on Merseyside

There have been reports of an explosion on Merseyside. Merseyside Fire and Rescue said it was responding to a suspected gas leak in the New Ferry area and had four appliances in attendance. A statement is expected shortly from Merseyside Police. Network Rail said police were dealing with an incident, disrupting the line between Birkenhead Central and Ellesmere Port/Chester and services will be suspended. This is expected to continue until 22:45 GMT, it said. 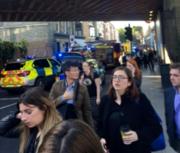