A woman walks past a map showing the elevation of the sea in the last 22 years during the World Climate Change Conference 2015 (COP21) at Le Bourget, near Paris, France, December 11, 2015. Science teacher Matthew Fox approached the climate change materials he had received in his school mailbox in the same way he had taught his students to think like scientists -- with an objective frame of mind. Fox was part of the first wave of 25,000 science teachers in March who received an unsolicited package from the Heartland Institute, a libertarian think tank, which casts doubt on the role humans play in climate change. The package contains a booklet, 'Why Scientists Disagree About Global Warming,' a DVD, and a cover letter, which encourages educators to teach their students that a lively debate over climate change continues to take place among scientists. "None of my colleagues were fooled.

Ever since Environmental Protection Agency (EPA) administrator Scott Pruitt and other Trump administration officials raised the idea of putting climate science up for debate, it's been an open question as to where the participants who doubt mainstream climate science would come from. Now that is becoming clearer, and the answer is sure to further convince many that this entire exercise is a set up to discredit some of the most basic, rigorously studied climate science conclusions. SEE ALSO: EPA chief wants his useless climate change'debate' televised, and I need a drink The Washington Examiner reported on Monday that the EPA has reached out to the controversial Heartland Institute for help in casting the so-called "red team" that would try to poke holes in the evidence presented by mainstream climate scientists. The Heartland Institute is a free market think tank that has received funding from the oil and gas industry and has spent that money to disseminate information to convince the public that the science linking human emissions of greenhouse gases from burning fossil fuels is flawed. This fall, the group began mailing 200,000 copies of a report entitled, "Why Scientists Disagree About Global Warming," to science teachers across the U.S. The report encouraged teachers to tell their students that climate scientists are still debating why the Earth is warming, when in reality the climate science community isn't debating that at all. 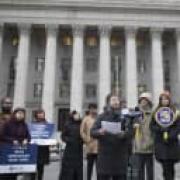 HARTFORD, CONNECTICUT - A Connecticut lawmaker wants to strike climate change from state science standards. A Virginia legislator worries teachers are indoctrinating students with their personal views on global warming. And an Oklahoma state senator wants educators to be able to introduce alternative viewpoints without fear of losing their jobs. As climate change becomes a hotter topic in American classrooms, politicians around the country are pushing back against the near-universal scientific consensus that global warming is real, dire and man-made. Of the more than a dozen such measures proposed so far this year, some already have failed.

To the editor: The Portland, Ore., school district is right to rid its textbooks of the manufactured doubt regarding the science of climate change. Groups like the Heartland Institute have been spinning misinformation and outright lies about the reality of climate change for too long. They are funded by the carbon-based energy industry, the very people who profit from selling dirty energy that is causing our planet to get warmer. Heartland spokesman Jim Lakely states that the kids are being "indoctrinated instead of taught how the scientific method works." This is classic "merchant of doubt" doublespeak.

Parents have fought successfully over the years to ban books like the Harry Potter series and Catcher and the Rye from public schools. Now in Florida, residents could possibly do the same with textbooks about the science behind climate change and evolution. Last week, Republican Gov. Rick Scott signed legislation that makes it easier for any Florida resident to object to classroom materials they don't like. SEE ALSO: Climate researchers shot down Trump's EPA administrator in the nerdiest way imaginable The statute, which took effect on Saturday, requires district school boards to hire an "unbiased and qualified hearing officer" who could deem things like textbooks, movies, and novels as unsuitable and require they not be used. Before this legislation, residents could only take their complaints to local school boards.