The Most Human Human: what artificial intelligence teaches us about being alive

Each year, the artificial intelligence community convenes to administer the famous -- and famously controversial -- Turing test, pitting sophisticated software programs against humans to determine if a computer can "think." The machine that most often fools the judges wins the Most Human Computer Award. But there is also a prize, strange and intriguing, for the "Most Human Human." Brian Christian, a young poet with degrees in computer science and philosophy, was chosen to participate in a recent competition. This playful, profound book is not only a testament to his efforts to be deemed more human than a computer, but also a rollicking exploration of what it means to be human in the first place.

As AI gains human traits, will it lose human trust?

While design and behavior have always been linked, the connection is gaining a new significance thanks to the next-generation of technologies. Consequently, this next-generation of technologies will be unlike any we have seen so far. They will enable a new era of human augmentation, in which technologies look like us and act like us, often without our input. Human augmentation technologies will be game-changing for companies and their customers. They could open up new ways of engaging consumers -- from conversational interfaces that replace keyboards to digital assistants that autonomously make purchasing decisions -- and create a new generation of empowered "super consumers."

There have been multiple reports recently which claim that a major part of the human workforce will be replaced by automatons and machines in the years to come. With excessive research and development being conducted in the field of artificial intelligence, many fear that a major job crisis will unfold since multiple jobs are more accurately and efficiently performed with the utilization of machines. With major names like Stephen Hawking already warning the world that development of robots and intelligent machines beyond a certain point could mark the end of humankind, the intimidation is real, to say the least. Is it possible for the machines to completely replace the human resources? Are humans really not going to find any job in upcoming decades, where every task is performed by the automatons and intelligent machines?

In 1996, Deep Blue, a chess-playing computer developed by IBM, was the first machine to win a chess match against the world champion Garry Kasparov. Since then, artificial intelligence has gone down a rapid development trajectory, now even questioning the divide between technology and creativity. Pushing past the notion of the machine as the extension of the artist, Harold Cohen, former artist and professor at the University of California San Diego, designed Aaron, an art-creating program that can paint still life and portraits of human figures without photos or other human input as reference. Artomatix, founded by Eric Risser in 2013, uses algorithms to leverage the'world's first artificial imagination'. The team at Deep Dream Google has spent recent years'teaching computers how to see, understand, and appreciate our world'. 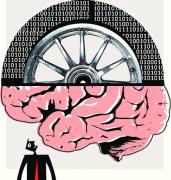 BARCELONA: SoftBank founder and CEO Masayoshi Son today outlined his vision for artificial intelligence and said computers running AI programs will exceed human intelligence within three decades. Delivering a keynote address at the Mobile World Congress here, Son said he expects one computer chip to have the equivalent of 10,000 IQ within this period. "In the past 2,000 years, the hardware in our brains has not improved... In the next 30 years, AI will overtake human intelligence," he said. Son added that with the strong growth seen for Internet of Things (IoT), the number of embedded chips that are recording and transforming data into something useful will top "one trillion".