Tabletop roleplaying games (TTRPGs) and procedural content generators can both be understood as systems of rules for producing content. In this paper, we argue that TTRPG design can usefully be viewed as procedural content generator design. We present several case studies linking key concepts from PCG research -- including possibility spaces, expressive range analysis, and generative pipelines -- to key concepts in TTRPG design. We then discuss the implications of these relationships and suggest directions for future work uniting research in TTRPGs and PCG. 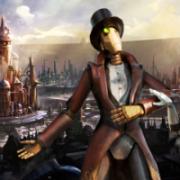 Artificial intelligence in games is often designed to be an actor, not a director. Typically, AI drives characters in games to behave and respond to the player in a way that feels believable and entertaining, but remains within the constraints of a world designed by humans. This is my open-world game, say the human developers, and here are the things players may do within it; a player may choose how and when to engage with the game's various facets, but the game will never create new stories tailored to the player's interests; It can't. What if you could design a game capable of generating its own narratives, via an AI that watches what the player does and tailors the game to their actions? That's the pitch for Toska, a new "procedural AI narrative engine" that Canadian developer Evodant Interactive has been working on, in some form or another, for nearly a decade.

This article describes the process of designing a point-and-click adventure game that aimed at using dream logic as the basis to create its narrative puzzles. The technical solution to tackle this challenge was using Procedural Content Generation (PCG) as the design approach, which was used expressively to recreate the instability and changeability of dreams. Although PCG brought about replayability to the game, called Symon, it also created a series of other development problems, which had to be remedied through other design devices. One of the lessons learned during the development of the game is that PCG is not a blanket solution to problems, but rather an expressive tool to be used in combination to other design strategies; human factors are also key both during the development and reception of narrative video games.

Live Action Role-Playing (LARP) games and similar experiences are becoming a popular game genre. Here, we discuss how artificial intelligence techniques, particularly those commonly used in AI for Games, could be applied to LARP. We discuss the specific properties of LARP that make it a surprisingly suitable application field, and provide a brief overview of some existing approaches. We then outline several directions where utilizing AI seems beneficial, by both making LARPs easier to organize, and by enhancing the player experience with elements not possible without AI.

We introduce the Chronicle Challenge as an optional addition to the Settlement Generation Challenge in Minecraft. One of the foci of the overall competition is adaptive procedural content generation (PCG), an arguably under-explored problem in computational creativity. In the base challenge, participants must generate new settlements that respond to and ideally interact with existing content in the world, such as the landscape or climate. The goal is to understand the underlying creative process, and to design better PCG systems. The Chronicle Challenge in particular focuses on the generation of a narrative based on the history of a generated settlement, expressed in natural language. We discuss the unique features of the Chronicle Challenge in comparison to other competitions, clarify the characteristics of a chronicle eligible for submission and describe the evaluation criteria. We furthermore draw on simulation-based approaches in computational storytelling as examples to how this challenge could be approached.