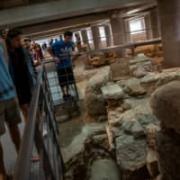 RIYADH/AMMAN/CAIRO/WASHINGTON - U.S. President Donald Trump's economic vision as part of the wider plan to resolve the Israeli-Palestinian conflict has been met with contempt, repudiation and exasperation in the Arab world, even as some in the Persian Gulf called for it to be given a chance. The $50 billion "peace to prosperity" plan, set to be presented by Jared Kushner, Trump's son-in-law, at a conference in Bahrain this week, envisions a global investment fund to lift the Palestinian and neighboring Arab state economies. The White House on Saturday outlined the plan, which includes 179 infrastructure and business projects and would fund a $5 billion transportation corridor to connect the West Bank and Gaza Strip. More than half of the $50 billion would be spent in the economically troubled Palestinian territories over 10 years; the rest would be split among Egypt, Lebanon and Jordan. Some of the projects would be in Egypt's Sinai Peninsula, where investments could benefit Palestinians living in the adjacent Gaza Strip, a crowded and impoverished coastal enclave.

A committee within in Jordan's parliament called for the expulsion of Israel's ambassador from the country in response to the latest measures taken by the Israeli army in occupied East Jerusalem. On Monday, Israeli soldiers placed locks and metal chains on al-Rahma gate of the Al-Aqsa Mosque compound and prevented hundreds of Palestinian worshippers from entering the site, while several were arrested inside the compound. In a statement read to Jordan's parliament on Tuesday, the Palestine Parliamentary Committee also called for the return of Jordan's ambassador from Tel Aviv. "We call on the government to recall the Jordanian ambassador from Tel Aviv, and to expel the Israeli ambassador in Amman," the statement read. The move to counter the latest Israeli measures has yet to garner an official response from Jordanian officials.

AMMAN/BAGHDAD – Islamic State militants attacked Syrian army troops with mustard gas in an offensive against a Syrian military airport in the eastern province of Deir al-Zor that borders Iraq, state media said on late Monday. Syrian state media did not disclose how many casualties were sustained in the latest drive by the hard-line fundamentalist Sunni militants to capture the heavily defended airport located south of Deir al Zor city, whose main neighborhoods are under the militants' control. "The terrorists fired rockets carrying mustard gas," a statement said on state owned Ikhbariyah television station. Deir al-Zor is a strategic location. Reuters could not independently verify the media reports.