BRETT the Robot learns to put things together on his own

Full Story: http://newscenter.berkeley.edu/2015/0... UC Berkeley researchers have developed algorithms that enable robots to learn motor tasks through trial and error using a process that more closely approximates the way humans learn, marking a major milestone in the field of artificial intelligence. In their experiments, the PR2 robot, nicknamed BRETT for Berkeley Robot for the Elimination of Tedious Tasks, used "deep learning" techniques to complete various tasks without pre-programmed details about its surroundings.

A work crew cleans up the remains of a charred portable light on the University of California, Berkeley campus in Berkeley, Calif., Thursday, Feb. 2, 2017. The University of California, Berkeley has become a campus renowned for peace and openness where all viewpoints are welcome. It was anything but that on Wednesday night when violence and rioting forced the cancellation of a talk by right-wing provocateur Milo Yiannopoulos. A spokesman for the campus said it was "not a proud night" for the birthplace of the Free Speech Movement. 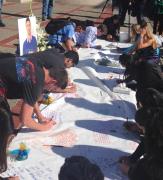 Students leave condolences on a banner for Nicolas Leslie, who was killed in France last week, during a vigil at the University of California, Berkeley Monday, July 18, 2016 in Berkeley, Calif. Leslie, 20, a Berkeley student who was killed in last week's Bastille Day truck attack in France was remembered Monday as an energetic and engaged member of the campus community. Leslie was an aspiring entrepreneur and environmentalist who participated in fraternity life and a student-run consulting group that provides marketing, research and social responsibility advice to businesses, student body President William Morrow said.

Busby Berkeley is one of the few directors whose name is synonymous with, and instantly evocative of, a style--namely, musical production numbers featuring undulating masses of geometrically arrayed dancers, photographed from angles that turn their physiques into abstractions. But Berkeley, whose movie was at its most robust from 1930 through the early fifties, is more than the inventor of that emblematic style; he's a cinematic philosopher whose symbolic inventions bear and develop ideas and intimations that Hollywood movies, facing public mores and self-censorship, would have had trouble unfolding dramatically. Those ideas involve sex; his main idea is the embodiment of desire in the very modes and norms of social life that channel and impede its expression and satisfaction. Berkeley's work is the subject of a retrospective at Film Forum that starts today and runs through December 15th; that series is anchored by a batch of films that could be called his Magnificent Seven. Those seven films--five Warner Bros. musicals from the early nineteen-thirties ("42nd Street," "Footlight Parade," "Gold Diggers of 1933," "Dames," and "Gold Diggers of 1935"), plus two wartime films from the early forties (a fascinating outlier, "For Me and My Gal," and, above all, his masterpiece, "The Gang's All Here")--form the core of his body of work and reveal the essence of his work with the body.