Voting has begun in earnest in Russia's parliamentary election, dominated by President Vladimir Putin's supporters. Far Eastern regions are the first to vote en masse in a country spanning 11 time zones, though some ballots were cast early in remote areas. Evidence of vote-rigging sparked mass protests after the 2011 election. For the first time, Russia is holding elections to its parliament in Crimea, which it annexed from Ukraine in 2014 in a move condemned internationally. Voters will choose 450 MPs in the State Duma (lower house), for the next five years. 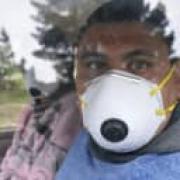 KIEV - A Ukrainian court on Thursday found ex-President Viktor Yanukovych guilty of high treason and sentenced him in absentia to 13 years in prison for asking Russia's Vladimir Putin to send troops to Ukraine. In 2014, Yanukovych was ousted as a result of a bloody uprising after his attempts to quell it failed. He fled the country and asked Putin to send troops to Ukraine to help restore his control over the country. "Yanukovych committed a crime against the foundation of Ukraine's national security," Judge Vladyslav Devyatko said in Kiev's Obolon district court. Yanukovych was also found guilty of "complicity in waging an aggressive war against Ukraine," Devyatko said, adding his prison term would begin "the moment he is detained."

Protests in Ukraine raise specter of another uprising

KIEV, Ukraine – In the raw cold and winter rain, Serhiy Hrey stood amid a protest tent camp outside Ukraine's parliament, making firebombs and declaring his readiness to fight.

Annexation of Crimea: A masterclass in political manipulation

The annexation of Crimea was a triumph of political manipulation over national interests and common sense. This is why old-school geopolitics alone cannot explain what really happened between Russia and Ukraine in March 2014. What usually debilitates the analysis of this episode, at least in the West, is the tale of an inherently violent alien Russian race intent on conquering the world. An identical twin of Kremlin's myth about the West plotting to destroy Russia, it is peddled by hawks who live in symbiosis with their Russian counterparts and grow in strength by pushing polarising agendas. Of course, the image they are trying to sell can't be more different from the complicated reality of the relatively modernised post-Soviet mafia state with its mild authoritarianism, deep integration into the Western cultural and financial realm, and - critically for the Crimean story - extreme psychological dependence on feedback in the form of opinion polls and approval ratings.

Fox News Flash top headlines for Nov. 9 are here. Check out what's clicking on Foxnews.com Ukrainian forces and Russian-backed separatists began pulling back from a war-torn village in the Donbass region on Saturday, a significant move that could set the stage for a later summit between Ukraine, Russia, France and Germany in a bid to restore peace to the war-torn area. Armed conflict between rebels backed by Moscow and Ukraine has been ongoing since 2014. More than 13,000 people have died to date, including thousands of civilians.