Two startups-- View Inc., which makes light-adjustable glass, and Zume Inc., which uses robots to make pizza--disclosed investments over the past week totaling a combined $1.5 billion from SoftBank's Saudi-backed Vision Fund. Late last month, Katerra Inc., an innovator in property construction, reached a tentative deal with the Saudi government to build up to 50,000 units of housing annually for the kingdom. That followed a $1 billion funding round led by the Vision Fund early this year that valued the Menlo Park, Calif., company at more than $3 billion. Meanwhile, negotiations continued in recent weeks for a deal in which Tokyo-based SoftBank would invest $15 billion to $20 billion to buy a majority stake in WeWork Cos. likely with Vision Fund money, according to people familiar with the discussions. A WeWork spokeswoman declined to comment.

Tech Backs Away From Saudis After Journalist's Alleged Murder

In recent years, the Saudi Arabian monarchy has poured billions of dollars into Silicon Valley, promoting the image of Crown Prince Mohammed bin Salman as a savvy reformer, eager to modernize the country. But after recent allegations that Saudi agents killed journalist and critic Jamal Khashoggi, some of those companies and investors are tentatively backing away from the regime. Khashoggi, a US resident and columnist for The Washington Post, was last seen at the Saudi consulate in Istanbul on October 2. The Post reported that Turkish officials claim to have audio and video recordings proving that Khashoggi was murdered and dismembered in the consulate by a group of Saudi agents. As details emerged about Khashoggi's disappearance, some tech figures have distanced themselves from high-profile Saudi projects. On Tuesday, Neom, a planned government-backed futuristic megacity, released a list of advisory board members.

How much power does Saudi Arabia wield over the global economy?

Up until Saudi journalist Jamal Khashoggi's killing on October 2, the Saudis were on a charm offensive - building brand new megacities, investing in tech start-ups and letting women drive. The world's biggest oil exporter did everything it could to convince the world it was serious about change, and investor confidence was growing. This plan for the future was the brainchild of Crown Prince Mohammed bin Salman who was feted as a reformer. But then Khashoggi was killed and now Saudi Arabia and its crown prince are facing international scrutiny. At an investment conference this week the crown prince rejected any idea his economic ambitions would be curtailed. 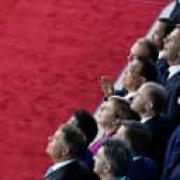 SAN FRANCISCO – The crisis surrounding the disappearance of journalist Jamal Khashoggi, and concerns that he may have been killed in the Saudi Arabian Consulate in Istanbul, has highlighted the role of the Middle East kingdom in the U.S. economy, especially in Silicon Valley. Saudi money has been a key source of capital for startups and other technology firms in recent years, led by the huge Saudi sovereign wealth arm known as the Public Investment Fund, but also from individual members of the Saudi royal family and the Kingdom Holding Co., the investment arm of Prince al-Waleed bin Talal, according to the research firm CB Insights. The most prominent of the investments was a $45 billion contribution in 2016 to the SoftBank Vision Fund launched by the Japanese conglomerate focusing on tech and startups, followed by a pledge of another $45 billion this year. That gives the Saudis at least an indirect role in some of the hottest companies in the tech sector, including Uber, Slack, WeWork and Nvidia. But the Saudi funds and royal family members also have made direct investments in Silicon Valley, including the $3.5 billion infusion in Uber from the sovereign PIF fund, a deal that helped put the fund's managing director, Yasir al-Rumayyan, on the Uber board of directors.

The brutal murder of journalist Jamal Khashoggi at Saudi Arabia's Istanbul consulate this month, which Turkish officials say was carried out by Saudi agents, has sparked a reckoning in Silicon Valley. The kingdom has poured billions of dollars into the tech industry, and a number of prominent startups, including darlings like Uber, WeWork, and Slack, may now need to grapple with the consequences of enriching a brutal regime. More broadly, some founders, venture capitalists, and other investors are beginning to ask a simple but often neglected question: Where is our money coming from? Saudi Arabia's massive investments in American tech companies have been hard to ignore. The kingdom contributed $45 billion to the SoftBank Vision Fund, which has invested in American tech companies like Doordash, Wag, WeWork, Slack, and Uber.