Deported ex-Marine wins case to return to U.S. from Mexico

SAN DIEGO – A former Marine deported to Mexico 15 years ago after he was convicted of a minor offense has won his fight to return to the United States and regain his permanent U.S. residency.

You may have survived Thanksgiving with your racist uncle, but President Donald Trump won't let that feeling of relief last long.

Fox News Flash top headlines for Jan. 24 are here. Check out what's clicking on Foxnews.com None of my duties and experiences as second lady of the United States has been as fulfilling as the opportunity to work with those who have served and sacrificed for this country: America's military service members, spouses, veterans, and their families. As a proud Blue Star mom of a U.S. Marine, I have a deeper understanding of the daily sacrifices. Without a doubt, our Armed Forces deserve our respect and care.

Trump marks another 9/11 anniversary with war still raging, issues threat against any further attacks on U.S. 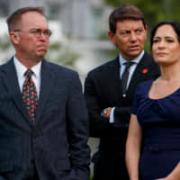 WASHINGTON – On his third Sept. 11 anniversary as president, Donald Trump on Wednesday remembered the victims, first responders and U.S. troops that have battled in Afghanistan, and he unleashed threats against militants contemplating another attack on America. "If anyone dares to strike our land, we will respond with the full measure of American power and the iron will of the American spirit and that spirit is unbreakable," Trump said at the Pentagon. It has been 18 years since al-Qaida hijackers commandeered four U.S. commercial airliners and crashed them into the World Trade Center, the Pentagon and a field in Shanksville, Pennsylvania. Like Presidents Barack Obama and George W. Bush, Trump marked the day with the war still raging. "If for any reason, they come back to our country, we will go wherever they are and use power the likes of which the United States has never used before and I'm not even talking about nuclear power," Trump said without elaborating on what he meant.