We Now Return to Your Regularly Scheduled Nuclear Crisis

The Winter Games in South Korea are over, so the winter-is-coming games now resume. I refer, of course, to the storm clouds of bluff, brawn, and blind global terror swirling around the faceoff between Donald Trump and Kim Jong-un and the stupefyingly real chance that it could spark a nuclear war.

After years of failed attempts by the United States and others, is U.S. President Donald Trump the man who can strip North Korea of its nuclear weapons and bring lasting peace to the Korean Peninsula? Trump remains ever confident that he is the right man for the job, but experts say North Korean leader Kim Jong Un is not about to part with his "treasured nuclear sword" -- at least not any time soon. "Kim Jong Un would no doubt take a huge hit inside the regime if he gave up the nuclear program," said Ken Gause, a North Korean expert and director of the International Affairs Group at the Center for Strategic Studies, a division of the Center for Naval Analyses in Washington. "For that reason, I don't think he would do it immediately," Gause said. "Denuclearization would be a long process that would take years and be tied to significant guarantees, such as a peace treaty. 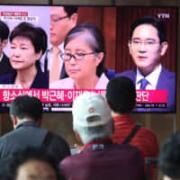 WASHINGTON – Two months after the dramatic Trump-Kim meeting at the Demilitarized Zone between North and South Korea, the world's most heavily fortified border is back to its perpetual state of tension, as if nothing happened. When U.S. President Donald Trump set foot into North Korea and shook hands with Chairman Kim Jong Un, there was hope that relations between the two adversaries would see a further thaw. But now, remnants of the remarkable rendezvous are nowhere to be seen. Instead, North Korea has reverted back to its usual missile-firing activity and brinkmanship. In August, it conducted several weapons tests, including a new short-range missile.

The president is also ramping up his rhetoric on Pakistan and Iran.

Donald Trump's candidacy has been a source of anxiety for many reasons, but one stands out: the ability of the President to launch nuclear weapons. When it comes to starting a nuclear war, the President has more freedom than he or she does in, say, ordering the use of torture. In fact, the President has unilateral power to direct the use of nuclear weapons under any circumstances. Cabinet members may disagree and even resign in protest, but, ultimately, they must obey the order of the Commander-in-Chief. It's all too easy to imagine Trump issuing an ultimate, thermonuclear "You're fired!" to China, Iran, or another nation--and perhaps to the whole human race.*