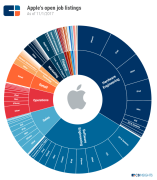 SAN FRANCISCO – Apple Inc. has packed its new-model, top of the line iPhone with augmented reality (AR) features, betting the nascent technology will persuade consumers to pay premium prices for its products even as cheaper alternatives abound. The iPhone X -- Apple's most expensive phone ever, priced at $1,000 (¥110,000) -- was one of three new models Chief Executive Officer Tim Cook showed off Tuesday during an event at the company's new $5 billion headquarters in Cupertino, California. It also rolled out an updated Apple Watch with a cellular connection, and an Apple TV set-top box that supports higher-definition video. The event marked the 10th anniversary of the original iPhone, and started by remembering the late co-founder Steve Jobs. The product announcements were greeted with enthusiasm but little surprise by analysts, investors and fans of the company's products.

Apple is working on a pair of 'augmented reality 5G' glasses

Apple is working on a pair of augmented reality (AR) glasses that support 5G networks, according to a technology analyst familiar with the tech giant. The AR glasses, simply called'Apple Glasses', are not sunglasses but normal prescription glasses that display an interface on the inside of the lens. Anyone facing an Apple Glasses-wearing user will not be able to see the AR display, which will overlay digital images over the user's real-life surroundings. Leaker and technology analyst Jon Prosser said he saw two prototypes of the Apple Glasses at the company's premises – one white and one black. Both models, which are described as'clean' and'slick' in appearance, will be 5G-compatible, he said.

The TL;DR version is: pretty much what they did in 2016. Update popular hardware, expand services, steer clear of new product categories and make a boatload of money. However, buried inside those pat and rather obvious observations is a company that may be in search of its mojo. There is nothing wrong with Apple or its offerings, but the company that reinvented and reinvigorated numerous product categories has spent the last two years polishing its own Apples. In my totally anecdotal Twitter poll on which word best described Apple in in 2016 -- Aggressive, Innovative, Slipping, Successful -- Slipping won by a commanding margin.